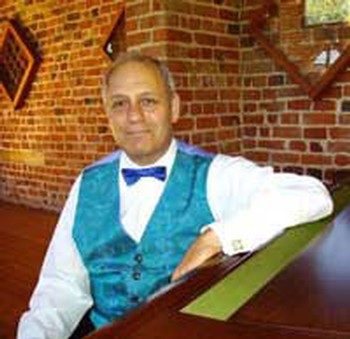 Described by The New York Times as "a man whose nature was designed with pianos in mind", ANTHONY GOLDSTONE is recognised as one of Britain's most
respected pianists, a judgment confirmed when the BBC issued his performance of Beethoven's Fourth Piano Concerto at the London Promenade Concerts in their CD series "Radio Classics".

Born in Liverpool he studied at the Royal Manchester College of Music (which later honoured him with a Fellowship) where his piano professor was Derrick Wyndham, and later in London with Maria Curcio, one of Schnabel's greatest pupils - which incidentally makes him a sixth-generation pupil of Beethoven. Inspired by this wonderful heritage Goldstone has always regarded the classics and romantics as being at the heart of his repertoire; this is
illustrated by two past CD projects: a series on the Olympia label of rare Russian Romantics - Lyapunov, Arensky and Glière, and a series of six CDs on the
Divine Art label devoted to the major solo works of Schubert: "Goldstone is a native speaker of Schubert in the highest degree. This is perhaps the greatest version of the work [Sonata, D. 959] I have ever encountered, either live or on disc." - Fanfare, USA. His two most recent solo CDs for Divine Art are of favourite Beethoven works, but typically including a world first - Moscheles's transcription of the overture to Fidelio: "absolutely compelling" - Musical Opinion, and "Tzigane", a treasury of Gypsy-inspired music: "Don't miss" - Classic FM Magazine.

International prizes in Munich and Vienna and a Gulbenkian Fellowship launched him on a busy schedule of recitals and concertos, of which he plays eighty.
His travels have taken in concert appearances in Europe, North and South America, Asia, Africa and Australasia, prestigious festival invitations and very
many broadcasts. Numerous London appearances have included important solo recitals and Promenade Concerts, notably the Last Night, after which Benjamin
Britten wrote to him, "Thank you most sincerely for that brilliant performance of my Diversions. I wish I could have been at the Royal Albert Hall to join in the
cheers."

Complementary to the mainstream repertoire is his avid interest in exploring intriguing musical byways - not only unknown works by acknowledged masters, leading to première recordings and performances of Elgar (the Enigma Variations in Elgar's own piano solo version on Elgar's own piano), Parry (the Sonatas etc. on Parry's own piano), Sibelius, Bruch, Franck, Mendelssohn, Holst etc., but also unjustly neglected nineteenth-century composers such as Goetz, Herzogenberg, Alkan and Moscheles. He founded the ensemble The Musicians of the Royal Exchange of which he is pianist/director and which has performed works by over a hundred composers. Finally, he and his wife Caroline Clemmow comprise a prominent piano duo whose recordings, broadcasts and concert appearances receive wide praise from public and critics alike. Their acclaimed seven-CD cycle of the complete original four-hand music of Schubert, including works not found in the collected edition, is probably a world first. When it is appropriate Goldstone introduces the music he plays informally and informatively, considering the rapport he creates with his audience to be of major importance.

Following a recital containing Schubert's Wanderer-Fantasie and Beethoven's Diabelli-Variations, Die Presse of Vienna wrote of him, "A musician with a
sense of the grand manner, long lines unfolding without interruption, strongly hewn rhythms, warmth, a touch displaying the qualities of colour and cantabile, in addition to possessing a sure technique and real strength. An even greater impression was created by his astonishingly profound spiritual penetration."

Goldstone's completions and realisations of several works by Schubert and Mozart have been greeted with enthusiasm by musicologists and listeners alike.