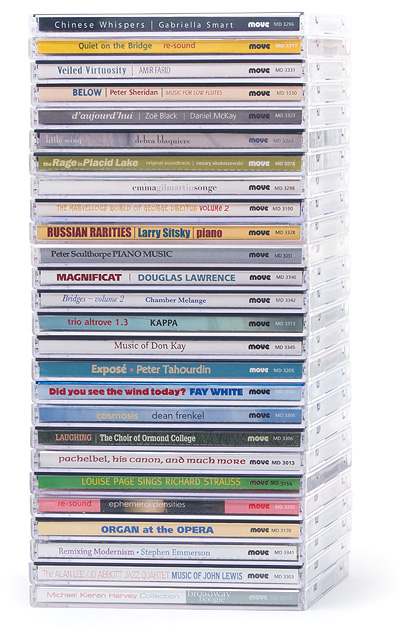 There is a very real need for Australian performers and composers to be recognised through the recording process. From its inception in 1968, Move has provided the means for Australia's best classical and innovative musicians to have their work recorded, published, and exposed to the public.

We are a recording label that concentrates primarily in classical music, particularly Melbourne-based musicians and composers. Although we venture out into jazz and contemporary fields, broad diversity would only serve to dilute our specialised focus.

We endeavour to offer as many performers as possible the opportunity of having their work recorded. A published recording is tangible evidence that their work is recognised by the Australian community, as well as internationally.

For many the CD represents years of hard work to achieve the standards of excellence in their field. Often the work is highly innovative and unique. To deprive future audiences of the contributions these artists have made would be to neglect the heritage that Australia ought to be establishing in the present.

Many Move sessions take place in our own purpose-built studio. It has a reverberation time that varies between one and two seconds, making it perfect for any acoustic small group or solo performer. The studio also boasts a Yamaha C7 grand piano hand-picked by pianist and composer, Tony Gould.

For every project we undertake, Move mantains a close professional liaison as well as personal relationship with the artist. Collaborative decisions go beyond the music itself, but also aspects of recording, production and final presentation.

Being small enables this direct contact with the artist. Artists have often remarked with satisfaction that they pick up the phone knowing they can talk directly with Martin instead of cruising around staff unfamiliar with their project.

Our size may have its limitations, but it has also been the reason for its stability and longevity. Individual commitment to each project, offering consistent, high quality recording services underlines what Move is about.

Aware that sales of the disc are dependent on the artist's willingness and enthusiasm in promotion, Move makes considerable effort to ensure that the artists assume a shared responsibility for the CD beyond the initial recording.

Despite many of the frustrations that beset a small record label, Move stands proudly on its reputation as a label committed to quality recordings of Australian musicians. The ever-increasing array of titles now available under the Move umbrella indicate a celebration of high standard and diverse talent that is present in Australia.

At a time when economic rationalism might demand popular titles by established artists, Move continues to put the music first.

Large recording companies in Australia – for the most part – make decisions based primarily on quantity. While Move aims to buck this trend, it is not possible to take on board every worthy request.

In order to take some projects through to completion and to remain in business, we have established very specific criteria to select the projects which offer both an opportunity for music which is inherently valuable and to some degree, commercially viable.

Move has never chosen projects on commercially viablility alone and in some instances recordings have proceeded with the knowledge that the project will never break even financially.

The kind of works selected varies considerably. Some artists only perform standard European classical repertoire but others do include Australian compositions in their concert programs. One of the aims of the company is to record not only living composers but also to rediscover composers (and compositions) of the past who have yet to make it into the digital era.

There is a huge dilemma when it come to selecting material for inclusion on a CD where funding is sought from the Australia Council. Performers know that live audiences tend to prefer what is familiar. Yet we feel a responsibility towards living, working composers. So, the argument might go, why produce a CD featuring a barely-known Australian composer when the Schubert, Bach, Mozart and Chopin is what the audience has requested? Yet even though they will sell far fewer copies, we do embark on projects of the more ‘difficult’ music.