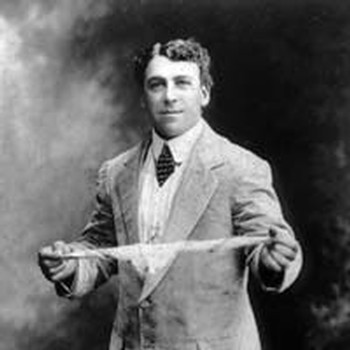 It could be argued that in 1910 Billy Williams, was one of the most significant popular entertainers in the world. Dozens of his songs could be heard on disc and cylinder recordings wherever English was spoken.

Many record companies clamored to have him sing for them in the days when tight recording contracts for particular performances or repertoire were less common than they are today. Music hall audiences all over Britain and in the far flung colonies of the Empire joined in the rollicking choruses of his songs. But nobody wrote a biography to give this vast audience details of the life of the man who led them in chorus after chorus. Indeed so little is known of his life that he is usually passed over with a brief note in recent accounts of the British music hall and in Australia he is often thought to have been English. He did not even begin to write his own story.

Such neglect seems outrageous given that he was probably the most recorded popular entertainer until he died in 1915. However, he occupied a number of dangerous no-mans lands. to begin with he was not English. He left Australia, thereby resigning his rights, it seems to be counted as such. He was a relatively late comer to the music halls which were probably in decline by 1912 when the acknowledgment of royalty in the first Command Performance (Variety) gave them an air of respectability and in some ways responsibility. That the music hall waned in the form it had taken in the 1890s seemed clear. It was replaced by a different set of variety acts and of course by the record player. Billy might have been seen as having compromised the living energy of his stage act in his recordings. This is why Marie Lloyd recorded so little. And of course he died young and suddenly.

Individually any of these reasons might have assigned Billy Williams to obscurity, regardless of his prodigious output and the fact that his remastered recordings remained in the catalogues until the late 1940s. What is clear is that even today his energy and enthusiasm for his art can be experienced again in the recordings he made, all of which have survived. and his recordings are monuments to the live act. Billy brought to the fledgling sound recording industry a voice more suited to the acoustic sound recording process than any other.

One song in particular has kept the Australian in the recording catalogues, especially since the arrival of the long playing disc which is devoted to nostalgia. The song is When Father Papered the Parlour. What has not been clear, is the course of his early career in Australia which led to the building of the image of the ‘Man in the Velvet Suit’. Even the name to which he was born was not known with any degree of certainty until the present research and the unravelling of a mythology that appears to have resulted from Billy's own exaggerated account of his Australian theatrical experience.

I can find no evidence that William Holt (Billy) Williams was in a modern sense, a legally valid person. From Britain it would have been difficult to search the ragged pieces of personal history available in places like Yanko Station (NSW) (where his parents married) or the regular church records in Melbourne. An air of legitimacy was given to the ‘Holt Williams’ in Britain by the change of name for the death record of Billy's father who died in 1914 at Billy's house in Shoreham - his tombstone announces that he was Richard Shaw Williams. The father is buried next to his son, William Holt Williams whose will is witnessed by Roland Holt Williams, presumably Roland Banks the important Australian golfer who is still called Roland (Roly) Banks later in Australian sporting journals. But Billy Williams was not given the chance to reflect with detached self-assessment that sometimes accompanies age.

Billy Williams is featured on the following titles

Recorded between 1907 and 1914, these 23 songs present a fascinating historical overview of the career of one of Australia's first pop recording stars.