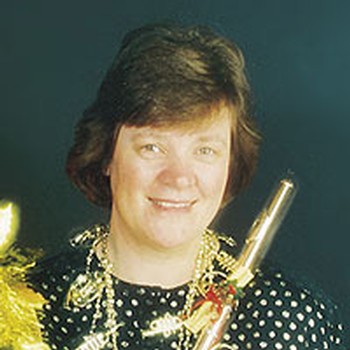 Elizabeth Koch studied piano with Clemens Leske for her Bachelor of Music degree at the University of Adelaide. In the second year of the degree she took up the flute with Professor David Cubbin, graduating with First Class Honours in both flute and piano and then completing her Master of Music degree in Flute Performance in 1983. After only three years of playing the flute, Elizabeth joined the Adelaide Symphony Orchestra and in the same year was Principal Flute of the Australian Youth Orchestra.

In 1976, Elizabeth was awarded a Churchill fellowship to study with Maxence Larrieu in Paris. During that period she performed in masterclasses with Jean-Pierre Rampal, Alain Marrion, Andras Adorjan and James Galway's class in Berne, Switzerland.

Elizabeth Koch is featured on the following titles

A Golden Christmas - for flute and harp

Elizabeth Koch and Suzanne Handel. A superb collection of popular Christmas carols and songs, arranged for the charming combination of flute and harp.