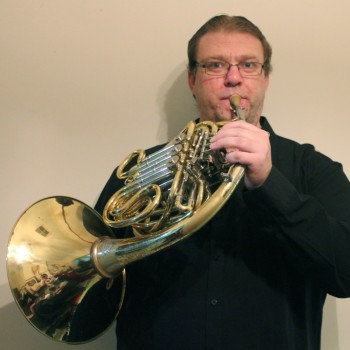 Mark Papworth began learning the horn at Winchelsea Primary School with Brian Blackett, before completing high school at the Victorian College of the Arts Secondary School studying with Russell Davis. After high school Mark moved to Perth to study at the University of Western Australia with Darryl Poulsen. During this time Mark developed a strong interest in studying historical performance practice and played the Classical and Baroque horn. During his time in Perth Mark also performed in major works by Wagner and Mahler with the West Australian Symphony Orchestra.

After graduating, Mark pursued his interest in historical performance practice and studied Baroque and Classical horn at Indiana University with Richard Seraphinoff. Mark regularly performs with orchestras and in chamber music on the Baroque, Classical and Modern horns and formed the chamber group Bonza Brass with Per Forsberg.

Mark plays on an Alexander 308 Horn, and on tracks 3, 4, 10 and 12 is playing on a Wagner Tuba provided courtesy of Sandra McColl.

Mark Papworth is featured on the following titles