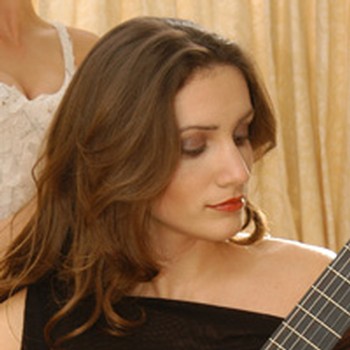 Milica Ilic (pronounced Mel-itza Ill-itch) is a classical guitarist who plays a living music that's vibrant, colourful, impassioned and her own. She is a naturalised Australian, based in London.

In 2002, when she was just 20 years old, Milica's dazzling musicality and alluring stage presence led to an invitation from the great tenor José Carreras to participate in his birthday celebration concert at Angkor Wat temple in Cambodia. Her performance on that occasion, as on many others since then, was warmly received and critically acclaimed.

Milica is a skilled interpreter of the standard classical repertoire, yet from an early age she has understood that technique is far more than merely a means to replicate familiar material. For Milica technique is a key that unlocks expression, connecting the performance of music to our shared and varied life of sensations and emotions, to memories and aspirations. Now in her mid-twenties she already has a wealth of vivid experience to draw upon in her creative life. From that springs music that's fiery and beautiful, tender, uplifting and intimate.

Milica has toured extensively in Australia, Asia and Europe. In 2005 she performed at international guitar festivals in Darwin, Ullapool, Kirkmichael and Ards. She also featured as special guest at a festival in Windsor, UK, hosted by Tommy Emmanuel, Australia's premier guitarist. In 2003 she took up an invitation to perform as guest soloist at 'An Unforgettable Evening - José Carreras in Concert' in Perth, Western Australia. The previous year Milica had accompanied José Carreras in Singapore, as well as at Angkor Wat, and was a featured soloist with the Singapore Symphony Orchestra.

"A more recent sensation is Milica Ilic. She emerged as a charismatic soloist, whose lyrical compositions show the hallmarks of a highly marketable talent." Paul Fowles, Classical Guitar Magazine, Dec 2005

Milica's playing - live and on record - has been enjoyed by listeners to the BBC, Classic FM and the Australian Broadcasting Corporation. Classic FM's Lisa Duncombe chose Rouge Guitar for the Presenter's Playlist in April 2006 and a reviewer for Classic FM Magazine declared, "The release that's caught my ear is from guitarist Milica Ilic. With her fiery virtuosity she's becoming an international superstar."

During 2000 Milica undertook special study with Czech guitar virtuoso Stepan Rak in Prague. In 2003 her outstanding musicianship was acknowledged through the award of a First Class Honours degree from the University of Western Australia, Perth, where she studied with renowned guitar teacher John Casey. In 2004 she was honoured as Western Australia's "Citizen of the Year" for her contribution to arts and culture.

For Milica the many personal tributes she has received are still more meaningful.

"It was a great pleasure to work on two occasions together with this talented young artist. I wish Milica all the best for her career!" José Carreras, April 2007

"For each time you meet Milica, she is never still. She is constantly challenging herself, looking deep into her soul to find that place where her creative and spiritual desires lie. Those of you who are fortunate enough to hear her play will agree that Milica is doing exactly what she was born to do." Guy Ghouse of the Australian group Desert Child

Milica Ilic is featured on the following titles

Stir the Sky is pervaded with a sense of places visited and people met, a sense of movement and music-making. There's also love, laughter, fond memories and bittersweet recollection. Each track is like a journal extract, a highly personal record being offered for sharing.