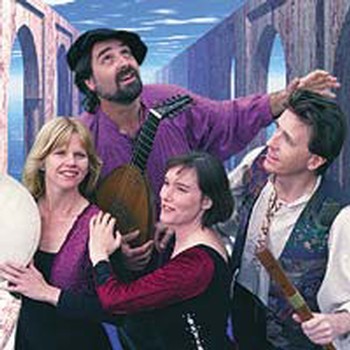 Pastance came together in 1993 to perform Mediaeval and Renaissance music. Pastance has performed for the early music fraternity but also for a wide range of audiences, from folk festivals and formal concerts to schools, corporate feasts and open air markets.

Their repertoire and performance style has therefore been shaped not only by their diverse musical interests but also by their desire to appeal to this broader audience.

The Sydney based ensemble brings together an amazing diversity of musical ingredients. Harp, lute, recorders, fiddle, gittern, bagpipes, percussion and vocals are used in arrangements of Anglo/celtic folk, early European and original music to create a remarkable sound.

As well as their unique arrangements of folk songs they explore a vast range of other music ranging from the medieval period, through the Renaissance and Baroque to compositions by Alex Cronin.

Sit Down Beside Me

In its inimitable style, Pastance again brings together music from the folk traditions and the early music world.

Pastance's most recent offering is a delightful collection of traditional, original, and early music for Celtic harp, recorders and voices.

'Joy' refers to the intent and inspiration that underlies so much of the music on this disc - and it gives us an appreciation of how music formed the backdrop to people's lives in the Middle Ages.

All the colour and mystique of the Middle Ages and the Renaissance come alive with a presentation that is rich in music and drama.