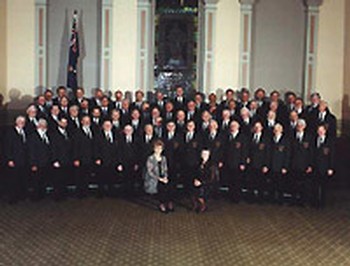 The Melbourne Welsh Male Voice Choir and the Victorian Welsh Singers combined to record the Gymanfa Ganu at the Robert Blackwood Hall, Melbourne in 1992. The combined choir totalled almost one hundred men, rehearsed and led by Alwyn Humphreys, musical director of the Orpheus Choir.

Members of the audience on the day of the recording described the choir ‘as the best Welsh choir outside Wales.’ Both choirs were formed in the 1980s. They are well-known throughout Victoria, and are regularly invited to perform at prestigious events. They have performed at most of the major concert venues in Australia, and have also ventured overseas. Whilst retaining their separate identities, the two choirs regularly come together for special events, particularly the celebration of their national day.