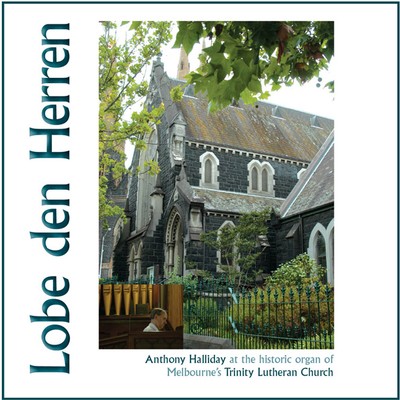 Renowned Organist and Concert Pianist, Anthony Halliday performs a varied recital on this charming and historic instrument. The program ranges from the grand organ works of J.S. Bach to Halliday's own transcription of the finale from Beethoven's 5th Symphony.

This recording concludes with Halliday's own composition, Fantasy on Lutheran Hymns followed by his transciption of Handel's Hallelujah Chorus.

"I, Doctor Martin Luther, wish all lovers of the unshackled art of music, grace and peace from God the Father and from our Lord Jesus Christ! I truly desire that all Christians would love and regard as worthy the lovely gift of music, which is a precious, worthy, and costly treasure given to mankind by God."

Lobe den Herren is available as as CD. It can be purchased online through Buywell Music or the Australian Music Centre which both offer secure online ordering.