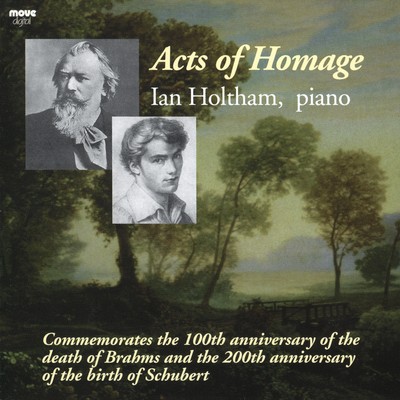 Includes Schubert's 'Four Impromptus Op.90 (D.899) ' written in the penultimate year of his life, these remarkable works based almost entirely on one theme are imbued with fantasy and colour and showcase Schubert's wondrous lyricism, beautiful melodies and colourful harmonic modulations.

As a further homage to the song writing talents of Schubert, this CD also includes Godowsky's 'Six Transcriptions of Songs by Schubert'. Featuring piano arrangements of Schubert's best loved lieder including 'Morgengruß', 'Die Forelle', 'Das Wandern' and 'Litanei' . Godowsky's virtuosic arrangements present an intriguing new perspective on each song while remaining faithful to the spirit of the original works.

The 'Variations and Fugue on a theme by Handel, Op. 24', written in 1861 show Brahms at the height of his creative pianistic powers. These twenty five variations, based on a theme from the first suite in B flat from Handel's 'Clavier Suites', each become independent character studies including a canon, a Hungarian rhapsody and a siciliana, the mammoth fugue concluding the set is a pianistic tour de force.

In contrast the 'Four Piano Pieces, Op. 119' featuring some of the most beautiful vignettes in the piano repertoire are intimate character pieces reflecting the influence of Schumann and the taste for miniatures of the late nineteenth century.

Recorded in the beautiful acoustic of Melba Hall, this CD provides a significant and memorable homage to two great composers.

“Holtham's interpretations are solidly drawn and refreshingly free of affectation.”

“Holtham plays it (Schubert's 'Impromptus Op. 90') on the piano, and makes you feel like you've never heard it before. The naturalness of Holtham's playing gives this 'Impromptu' set a startling vivacity.”

“This romantic compilation by Melbourne pianist Ian Holtham is both sensitive and enjoyable.”

Acts of Homage is available as as CD. It can be purchased online through Buywell Music or the Australian Music Centre which both offer secure online ordering.