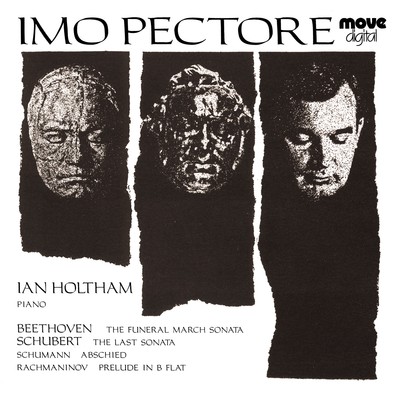 Beethoven's 'Sonata in Ab opus 26', contains the first real 'funeral march' in the piano repertoire and reflects the way in which the composer saw himself facing the gathering forces of total deafness and ensuing despair.

Their individual tragedies are a reflection of the overwhelming grief facing a modern society plagued by the tragedy of AIDS. The loss of life within the international artistic community has been without parallel.

Schubert, facing his own personal crisis in 1828 composed his last sonata, fatally ill, and aware of his impending death from syphilis. The death of Beethoven in the previous year had been a monumental blow to Schubert and he mourned that death deeply.

Imo Pectore also features Schumann's 'Abschied (Farewell) ' recalling his deep sense of loss, when as a young man he was brought the news of Schubert's death.

Holtham's performance of these works is as deeply intimate as the compositions themselves.

“a well-chosen and intensely personal attempt to explore the reaction of the creative mind in the face of death.”

Imo Pectore is available as as CD. It can be purchased online through Buywell Music or the Australian Music Centre which both offer secure online ordering.