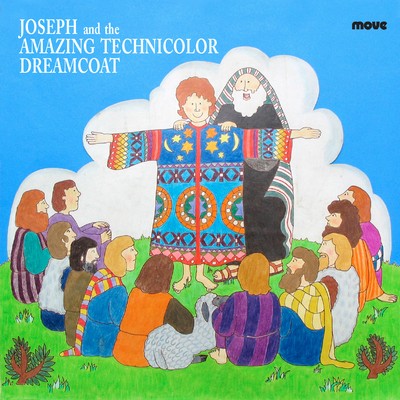 Joseph and the Amazing Technicolor Dreamcoat

A favourite since 1968, this recording comes from Canada featuring the dramatic vocals of Rob Gillespie.

The history of Joseph is an unusual one. Webber and Rice were originally asked by Alan Doggett, then head of hte music department at Colet Court School in London, to write a musical piece for his choir to sing at their end of term concert. The first ever performance of Joseph took place on 1 March 1968, as a 15 minute sketch.

In 1972 the work was staged at the Edinburgh Festival with the Young Vic Company, directed by Frank Dunlop. It went on to play the the Young Vic itself, and from there transferred to the Roundhouse in London. By now Joseph ran for 40 minutes, and in February 1973, it started its run at the Albery Theatre in London's West End. Productions around the world have continued ever since.

Joseph is an entertaining retelling of the story of Joseph and the coat of many colors. It has become a perennial favourite for schools both in its concert and dramatised versions. As The Gramophone said of the Joseph score in 1973, '...one of the freshest and liveliest scores of the decade, one which bears the repeated hearings which constitute the acid test of all good music'.

Audrey Johnson wrote of this recorded version of Joseph: 'It's appealing and marvellously rhythmic music is matched by frequently humorous words. Soloist Rob Gillespie is a standout. He injects mood and great beauty in ballads like "Close every door to me", furious dramatic climax into "Who's the thief?" and effective character differences between Joseph, Potiphar and Pharaoh'.

Joseph and the Amazing Technicolor Dreamcoat is available for download from the iTunes Music Store.
It's available for streaming through Apple Music.

Joseph and the Amazing Technicolor Dreamcoat is available as as CD. It can be purchased online through Buywell Music or the Australian Music Centre which both offer secure online ordering.