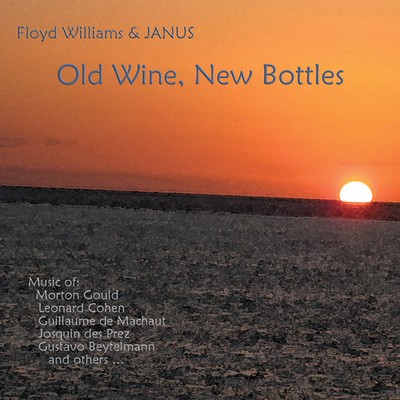 This approach was also used for the songs of Leonard Cohen where they were arranged by the very talented Jonathan Henderson for a chamber music ensemble.

This was taken further by the songs being sung in a manner closer to art song or lieder. I also thought it would be interesting to juxtapose the Cohen songs with earlier songs by Machaut and Josquin in order to emphasise what they have in common as regards the concerns expressed in the texts (the pain of love, jealousy, and betrayal).

This CD is a result of a concert organised as part of the staff concert series at Queensland Conservatorium Griffith University in April, 2008.

Mitchell Leigh's improvisations between the old and the new serve brilliantly as a transition to each of the Cohen songs. Also, I think early music from the 14th to 16th century can sound very effective on modern instruments which preserve and honour the music's melodic and especially its rhythmic impact. This has long been a practice in the performance of J.S. Bach's music which can now be heard on anything from a grand piano to a brass quintet.

A number of works show the importance of jazz influence in the 20th century. In Khai-Wei Choong's Logic in Transit we hear a very unusual rendering of A Nightingale Sang in Berkeley Square by Eric Maschwitz and music by Manning Sherwin and Jack Strachey. This is preceded by John Stefulj and Pat Marchisella's version of the song. Their imaginative improvisation will further enhance the listener's appreciation of Choong's version for bass clarinet and piano.
Finally, we close with a dance form: Gustavo Beytelmann's Airs au tour du Tango.
- Floyd Williams, August 2009

Old Wine, New Bottles is available as as CD. It can be purchased online through Buywell Music or the Australian Music Centre which both offer secure online ordering.