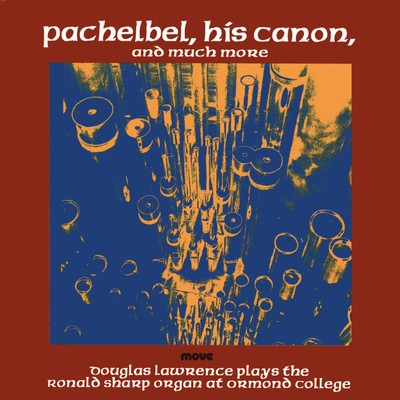 Features works by Pachelbel including the popular 'Canon in D major', music by Buxtehude including the 'Ciacona in E minor' and the 'Passacaglia in D minor', in addition to works by Greene, Camidge, and Schiedt.

These are the only recordings of the organ in the Ormond College Chapel built by Sydney organ builder Ronald Sharp, before it was rebuilt and enlarged in 1993.

Francis Alan Jackson, CBE, a British organist and composer was the organist and director of music at York Minster for 36 years. He visited Australia some time between 1974 and 1993 and had the opportunity to play the Ormond College organ, describing it as "the most beautiful sound I have heard in music" during an interview on ABC radio by Glen Menzies.

“... Pachelbel and Buxtehude (two LPs) have been digitally remastered and released on one splendid CD – with the Canon recorded this year on the organ rebuilt and enlarged by Kurt Smenge, allowing a fascinating comparison.”

“This record is in every respect a treasure”

“This is a great collection and the sound is as Ron Sharp left it.”

“The acoustics are a joy; warm, flattering and intimate ... the Canon in D recorded here after the instrument's restoration, comes up so well as to suggest this is a more positive arrangement than the one for strings.”

“The playing and articulation cannot be faulted. The sound of the organ is heard close up: delightful for softer pieces and you could listen to those endlessly.”

Pachelbel, His Canon and Much More is available for download from the iTunes Music Store.
It's available for streaming through Spotify and Apple Music.

Pachelbel, His Canon and Much More is available as as CD. It can be purchased online through Buywell Music or the Australian Music Centre which both offer secure online ordering.