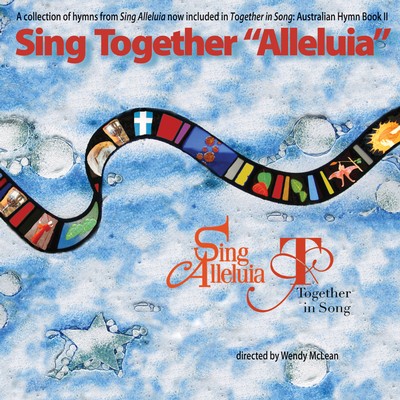 Hymns sung by the 'Sing Alleluia Music Ministry Team' from Sing Alleluia are included in Together in Song: Australian Hymn Book II, published in 1987.

Sing Alleluia contains unfamiliar hymns, songs, psalms, chants, rounds and communion settings, it became apparent that congregations could benefit from introductory sessions which explored creative ways of using music in worship. To this end a small 'ad hoc' group of singers and instrumentalists from Uniting Churches in Melbourne offered the possibility of workshops.

Apart from worship leadership, conducting retreats and conferences, a small group presented three sessions on Christian Television and recorded the entire 105 items on cassette with Move Records over a period of two years.

Recordings were made in Wesley Church in Melbourne, often on cold winter nights. The intention was to demonstrate what a small occasional group could contribute to a diverse presentation of worship song.

Meanwhile invitations followed which led to visits across the state of Victoria for two years during which time over 40 volunteers participated, forming the 'Sing Alleluia Music Ministry Team' directed by Wendy McLean. At any one visit there would be four singers, a pianist, possibly a bass guitarist and a woodwind quartet for whom parts were arranged.

In compiling this CD there have been criteria:

* to use only material not already on the Together in Song - A Selection - 2 CD set commissioned by the AHB company.
* word changes from Sing Alleluia to Together In Song are minimal.
* to select a wide variety of words and musical styles including some which may be for occasional use only, or which may at first appear less accessible.
* to present selections with diverse instrumental accompaniments.

The intention remains - to encourage the belief that what a group of mostly amateurs can do, others can do, to enrich the peoples' song to the glory of God.

Sing Together Alleluia is available as as CD. It can be purchased online through Buywell Music or the Australian Music Centre which both offer secure online ordering.