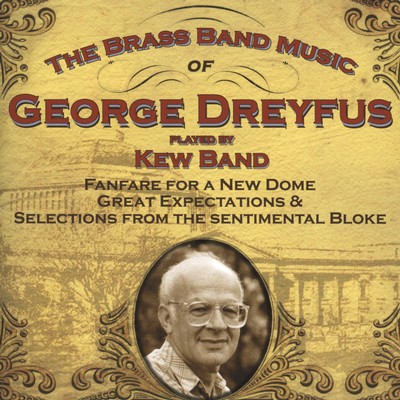 Very few Melbourne buildings have been honoured with their own personally written fanfare. However, composer George Dreyfus has been fortunate enough to pen two of these celebratory pieces. The first fanfare was to mark the opening of the National Gallery of Victoria's Great Hall in 1968 and the second was to herald the opening of the restored Domed Reading Room of the State Library of Victoria in 2003. George refers to a concept Giovanni Gabrieli and Heinrich Schutz devised when they wrote the fanfares for the opening of St Mark's Cathedral in Venice. "A fanfare has to be very direct and simple. If it's too complex you can't follow it around the space" The architectural design of the Domed Reading Room was a key element of his composition and allowed him to position brass instrumentalists in the reading room's four separate galleries, ensuring the audience would turn and follow the sounds - a bit like being at the tennis!

Film maker Tim Burstall gave George Dreyfus his very first film job, the Adventures of Sebastian the Fox in 1963, twenty three years later, in 1986, they were still working together, this time on Tim's fantasy version for ABC Television of Charles Dickens' masterpiece, Great Expectations, which freely developed Madgwick's adventures in Australia. In particular, the series starred Sigrid Thornton, who, as George states, is much more famous now than Burstall and Dreyfus put together.

This disc also features Hallelujah for Handel and Larino Safe Haven, After the chart-stopping success of Rush in 1974; Dreyfus was asked to write the music for the ABC Television series Power without Glory, based on Frank Hardy's great Australian classic. Here is a quotation from George's biography, The Last Frivolous Book:

"There was a great debate about whether or not I should use 'music of the day'. It was the time of Hollywood's remake of that marvellous novel, Day of the Locusts, which certainly used 'music of the day'. So I thought I'd use music of the Power without Glory days, which meant starting in the 1890s. I rang historian Geoffrey Blainey and asked him: "If you were living in Sackville Street, Collingwood, parallel to Johnson Street - where the tote was in 1890, what music do you reckon you would have heard?" He said people wouldn't have heard any. They wouldn't have had the money to go into town and hear concerts. Although John West and his mates were Catholics, the only music they would have heard would have been Salvation Army bands. "What d'you reckon?" I asked the ABC. "Fine" they said. So I went back to Geoffrey. "What would the Salvation Army bands have played?" "I don't know," he replied, "but my dad's still alive and he's ninety, and he reckons they would have played the march from Scipio and See, the Conquering Hero Comes from Judas Maccabaeus". So I started. First, I combined the melodic line of one piece with the bass line of the other. Then I contacted a Salvation Army band and got to know Colin Woods, the bandmaster, and borrowed from him the oldest bandbook he had. It was one of those little books that they pin up on their cornets. Then I got him to record a few hymns. I took a tape recorder into the Citadel (as they call their church buildings) and they spent some time putting things down for me. Then I wrote my theme for Power without Glory and it was a fusion of those two Handel pieces plus some up-tempoed hymns, and one other piece that I felt Melbourne folk of that time must have heard. It was Valentine's aria, Bravest Hearts from the most popular opera of the day, Gounod's Faust. One of the greats in Melbourne Brass Band history, the late Merv Simpson, recorded my freshly composed Power without Glory theme music with a super group of professional bandsmen at the Robert Blackwood Hall and I took the tape down to the ABC Ripponlea studios and played it to them. They thought it was all wrong. Why? It was NOT the Theme from Rush!
Over the next week-end I quickly wrote and recorded a new Power without Glory theme for normal symphony orchestra. But never one to waste anything, I recycled the brass band version by just sticking the new title of Hallelujah for Handel on the old brass band parts and have been performing it at my brass band concerts ever since"

George Dreyfus... and I hope that you enjoy the music

Larino, Safe Haven; In July 1939 George Dreyfus, his brother Richard and a group of fifteen other German-Jewish children, arrived in Melbourne. They were children whose parents were thought to have little chance of getting away from the ever-worsening, even life-threatening, persecution of Nazi Germany. The children were sponsored by the Australian Jewish Welfare Society and were accommodated in a large house, 'Larino' at the corner of Whitehorse Road and Maleela Avenue in the suburb of Balwyn. After the war the children were dispersed, some to distant parts of the world. To mark the 50th anniversary of their arrival in Melbourne, a reunion dinner was held on the 22nd July 1989, and when requested by the host, Dreyfus provided some dinner music to go with the occasion. The melody was actually the one written for the innocent scene in the television series Descant for Gossips made by Tim Burstall for the ABC in 1983, where young Vinny is given a dink on the bike by her friend Tommy Peters.

“Fine and sensitive playing ... a vital record of an Australian composer who loves to work with brass bands and has enriched the repertoire”

The Brass Band Music of George Dreyfus is available as as CD. It can be purchased online through Buywell Music or the Australian Music Centre which both offer secure online ordering.