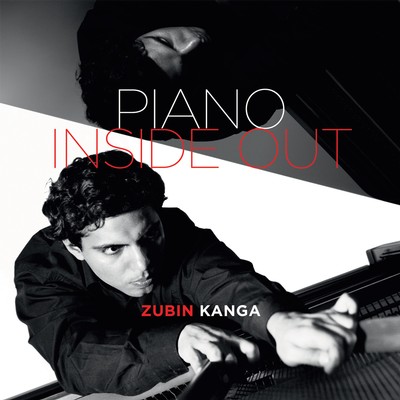 All the works explore new approaches to the instrument, and many invent new techniques and push the boundaries of virtuosity using piano preparation and extended techniques.

Elliott Gyger’s …out of obscurity opens with a mercurial two-part invention, cycling through different pairings of unusual techniques. Plucking, strumming and muting of strings and prepared sounds in the bass are mixed in a variety of combinations. In the second half, the counterpoint breaks apart and the sonic and expressive potential of each techniques is explored.

Nicholas Vines’ Uncanny Valley is a wild, colourful and virtuosic work, exploring the differing reactions we have to different types of almost-human figures: robots, puppets and even zombies.

David Young’s Not Music Yet is composed as watercolour graphic score that Kanga interprets using all his resources in and around the piano: playing the black sections using percussive and muted sounds, the white sections on the keyboard and the blue sections inside the piano on the strings.

Marcus Whale’s Errata explores minimal/mechanistic textures that expand across the keyboard before reaching a point of stasis, accompanied by the eerie sounds of e-bows (electromagnets on the strings).

Rosalind Page’s Being and Time II: Tabula Rasa takes inspiration from the painting Tabula Rasa by Imants Tillers, translating its multiple layers and influences into a mix of new sounds inside the piano, Baroque-inspired counterpoint and intimate, introspective melodies. Like Tillers’ painting, Page’s work is an expressive and multilayered exploration of memory, family, homeland and belonging.

Anthony Moles’ Diabolic Machines is a minimalist toccata, full of mechanistic drive and virtuosic flair that builds to a massive climax of cascading chords creating a wall of sound.

The seven new works traverse a wide range of styles across the whole spectrum of Australian contemporary music. But in their own unique ways, they all explode preconceptions of what is possible on the instrument, by turning the piano inside-out.

“Melbourne's Move Records as a long history of supporting new Australian composers and performers, so it's an excellent home for the new album by pianist Zubin Kanga. Contemporary repertoire is Kanga's area of expertise, particularly when it develops and extends the sonic capabilities of the piano. Australian composers are underrepresented in this field, and Piano Inside Out is the result of a two-year project to address that deficiency. In these seven works (all from the last five years) piano strings are dampened, plucked, hit and strummed, producing a vast array of atmospheric sonorities that complement more traditional virtuosic playing. Highlights include Elliott Gyger's expressively lyrical '…out of obscurity' and Rosalind Page's 'Being and Time II: Tabula Rasa' a meditative and beautiful cascade of colours that summons harpsichord visions. There's not a dud moment in these high-quality additions to the modern piano repertoire. Kanga's playing is characteristically sophisticated and commanding, and the exquisite quality of the recording is also noteworthy - not a hint of harsh brightness, but rather a deep, warm texture characterised by overtones and resonances roaming freely in a lush sonic landscape. Piano Inside Out is a beautiful recording, rich of layers and nuance. It would function splendidly as a primer for anyone wishing to begin an exploration of new music for piano.” ★★★★½

“Music for prepared/fortified/enhanced piano could have no better advocate than Zubin Kanga, as his new CD Piano Inside Out unequivocally demonstrates. And, as in a good old fashioned recital, the repertoire that Kanga presents is widely varied on style and manner, demonstrating both the breadth of technique and expression made possible by the various enhancements, and Kanga’s generous musical spirit. Inevitably, too, it reflects the healthy plurality of voices among our composers, ranging between the poles of modal simplicity and late modernist complexity, minimalism and maximalism, ‘high’ art and popularly-inflected forms. To Kanga’s credit, each work is given the same degree of respect and evident care.
In his beautifully written liner-notes, Kanga describes Elliott Gyger’s …out of obscurity as one of the ‘most complex, virtuosic and expressively beautiful works featuring extended piano techniques’ that he has come across. One can’t argue with that, with its glittering figurations, emphatic gestures and percussive ostinatos, febrile textures punctuated by insistent low sounds and largely serene final section. Gyger’s is a hard act to follow but Nicholas Vines does so more than creditably in his Uncanny Valley where the gradations of difference between robot and human, simulacrum and real object, are depicted in a substantial work of theme and variations. Vines’s music has a playful quality not in huge supply in new music – especially that of the real or imagined avant-garde – which is by no means to deny that his is a work of great amplitude. Where Gyger integrates the sounds produced by extended techniques into a highly wrought texture, Vines is inclined to play off traditional piano sounds against those of extended techniques to great dramatic effect. The self-consciously Lisztian gesture of the opening is offset by percussive thwacking, and, later, diaphanous textures as the music’s processes work themselves out.

In his Entre bajos y alturas Daniel Rojas similarly exploits the strong contrasts between traditional and extended techniques. After a mysterious opening of quiet portentousness and disembodied melody it unfolds as a striking work of strong rhythmic profile that welcomes elements from western and Latin American musical traditions.

Kanga notes that Rojas is one of the composers with whom he most frequently collaborates, though in this instance it is in David Young’s Not Music Yet that he is called upon to make a most extensive contribution, as the work grows out of a graphic score interpreted, with great poetic finesse and sonic imagination, by the pianist.

Marcus Whale’s Errata is a study in the creation of powerful effects of resonance, through the rapid repetition of single notes or chords, that appears and disappears in waves in a simple, yearning harmony of mild dissonance.

Rosalind Page opts, too, for an essentially simple harmonic language in her Being and Time II: Tabula rasa, inspired by the work of Imants Tillers. Like Rojas her work begins with quiet undifferentiated sound, a canvas on which she then elaborates, like Gyger, a kind of modal, neo-Baroque polyphony that is interrupted by terse and colourful gestures that lead into a sound-world reminiscent of Sculthorpe’s Snow, Moon and Flowers.

Anthony Moles, like Marcus Whale, might be said to gravitate towards the minimalist end of the spectrum in his Diabolic Machines. As Kanga remarks, it is probably the most traditionally virtuosic work in the collection, generating huge momentum through its layering of ostinatos, but containing moments of lapidary stillness at its centre.

As I have noted, Kanga’s prodigious musicianship and the breadth of styles represented here are both cause for celebration. Not every piece will appeal equally to all tastes, of course, but each is more than worthy of attention. And yet again, even without the resources enjoyed by some record companies, MOVE Records has produced a disc whose sound quality is beautiful and clear, the packaging attractive. It is a testament to the commitment of all concerned to exploring the new and encouraging innovation.”

“It's rare that music, regardless of genre, has the ability to truly astound. Zubin Kanga's album Piano Inside Out does. The album is the result of a two-year project embarked upon by Kanga, to collaborate with seven Australian composers and explore new possibilities with the piano. It's a fascinating showcase not only for his talent but also the talent of the composers. Kanga, an Australian pianist based in Europe, is a student of the piano, harking back to the virtuosi performers and composers of the 19th century. The debt he owes to his tutor and mentor Rolf Hind is both acknowledged in the liner notes and obvious in his playing technique. His approach involved deconstructing the piano and reinventing how the instrument is played. It's a physical performance, he gets inside the instrument playing the strings as well as the keys and it's from this approach to the piano that he has collaborated with the composers featured here. If this all sounds too modern and technical think again. Whilst this is an album with a serious theoretical approach to the piano and how the collaborative process between musician and composer can influence both sides of the creative partnership, it is also a joy to listen to. This is an album that will reward the listener again and again as you discover the subtleties and depths of both his performance as well as the way composers have brought a new approach to the piano. Whilst some of the composers involved in the collaboration, such as David Young or Elliott Gyger may already be familiar to you, the introduction of some young composers such as Marcus Whale and Anthony Moles is particularly exciting.” ★★★★

“In fact, this set of works is as close to up-to-the-moment as you could expect, yet another indication of the Move label’s commitment to Australian art and to contemporary music-making in particular. The pieces by Gyger, Vines and Rojas all date from 2011, the remainder of the content from the following year. Despite their near-contemporaneity of production, each work is couched in an individual voice.”

Described as “riveting” (The New York Times) and “full, extravagant and wild” (Sydney Morning Herald), the works of Nicholas Vines (b.1976, Sydney) have been commissioned, performed and celebrated by organisations around the world.

Daniel Rojas (b. 1974) is a Chilean-born Australian pianist and composer specialising in the rich and vibrant Latin American musical aesthetic.

Marcus Whale (b. 1990) is a Sydney-based composer, musician and artist. His practice encompasses live performance, sound installation and recordings, scored works and video.

Anthony Moles was born in Darwin, Australia in 1983. He studied composition with Gerard Brophy and Stephen Leek at the Queensland Conservatorium where he graduated with First Class Honours.

Piano Inside Out is available as as CD. It can be purchased online through Buywell Music or the Australian Music Centre which both offer secure online ordering.