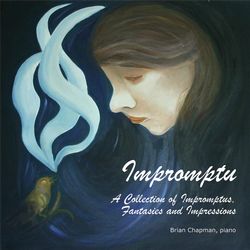 While Brian Chapman's latest CD "Impromptu - A Collection of Impromptus, Fantasies and Impressions" is largely a collection of some of his personal favourites, he makes some interesting claims to distinctive interpretations of three of the works on the CD.

Firstly, he takes Schubert's Impromptu in A flat, Op.142 No.2 much faster than any other performance available on CD. As he somewhat provocatively states in his program notes, anyone challenged to guess what tempo marking Schubert gave this piece would probably, under the influence of most recordings and public performances, accept the description Larghetto religioso, un poco lugubramente as a correct answer. In fact, the piece is marked Allegretto (fairly quick and lively) - a directive that would catch most people by surprise! In particular, he points to the passage commencing at measure 17 with a four-measure statement given in a forte dynamic followed by a reply given in fortissimo. Most performances conjure up a sound akin to weighty, ponderous fanfares of brass at this point. Chapman's rendition of the passage in question couldn?t be more different, conveying the listener forward with what he claims to be Schubertian lightness rather than Brucknerian bombast. This approach to tempo solves what he claims is a problem for conventional interpretations - whether to take the central arpeggiated section at the same slow tempo, at which it struggles to retain the listener's attention, or, as is often done, to introduce an unmarked tempo change to speed this section along at a more naturally flowing pace.

Secondly, Chapman introduces two unconventional features in his interpretation of Mozart's Fantasia in D minor, K.397. The most striking novelty is that he takes an unusually slow tempo for the Adagio section, a choice further compounded by his rejection of the common practice of introducing an unmarked più mosso at measures 23 and 38. This, he claims, assists in giving the whole Adagio a more dramatic, operatic treatment, resonant with dark, psychopathological overtones bordering on madness. Somewhat defensively, he points out in his program notes that "Mozart died too young to learn from any textbook that he wasn't a 'romantic' composer." The other novelty pertains to his following the example of some other pianists by using a different coda from the 'spurious' final ten measures usually heard; he supplies his own D minor variant of the 'spurious' ending, allowing the piece to end in its home key as was customary for works of this kind.

Thirdly, and perhaps most significantly, he pays explicit attention to the alla breve time signature of the opening Andante of Beethoven's Sonata quasi una fantasia in E flat, Op.27 No.1. As he mentions in his program notes, "This sonata shares two features with its more famous 'sibling' in C# minor: the title Sonata quasi una fantasia and the alla breve time signature for the first movement. These similarities were conferred by Beethoven. Sadly, there is a third similarity conferred by an overwhelming consensus of the world's pianists: the alla breve tempo markings are almost universally ignored in public performances and recordings!" As Chapman points out in his larger essay on the more famous "Moonlight" Sonata, (see the link on his homepage at www.qedinteractive.com.au) , it is not sufficient to take the piece at a sufficiently fast tempo for the two beats to be felt as such, it is also necessary to lighten the second and fourth half-beats in each measure, a necessity which he claims most pianists fail to realise in either of Beethoven's two sonatas of Op.27.

Brian Chapman will be including much of the music from this CD in his solo recital Classics and Impressions to be given at 2 p.m. on Sunday September 12th, 2010 in the Gallery at ARC Yinnar. This recital is presented in association with an art exhibition Poetry in Tone given by his wife Lucy in the same gallery from Friday September 11th to Thursday October 7th, 2010. For more details of the piano recital and art exhibition see the link on Chapman's homepage at the above web address