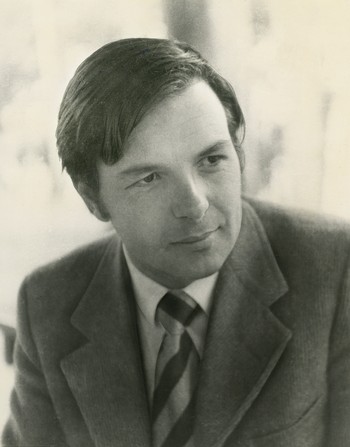 Ian Bonighton was born in Beaufort, Victoria. On leaving school he joined the Victorian Education Department in 1958 and spent two years at Melbourne Teachers' College. During 1961 he taught in Melbourne and was transferred to Geelong in 1962. In 1963 he returned to teach in Melbourne and began the first year course at the University of Melbourne Conservatorium, with the piano as chief­ study instrument, with Mack Jost, later changing to composition, which he studied with Basil Deane and Noel Nickson . In 1964 he resigned from the Education Department to devote himself more seriously to composition, and lived from a variety of odd jobs, such as taxi-driver, sheet metal worker and spray painter and this extended into 1965, while he worked privately only with Basil Deane.

By the end of 1965 he had composed six composi­tions, mainly serial, and had won the David Coutts Memorial Prize for a string quartet. Keith Humble was appointed to the Conservatorium in 1966 and through him Bonighton was introduced to post-war contemporary music. He heard a large amount of the current overseas compositions not available on commercial recordings through Humble's large tape collection and from tapes supplied by Don Banks, and he read widely into available scores. He was soon participating in Humble's workshop with the formation of the Society for the Private Performance of New Music (SPPNM) which held its activities in the Percy Grainger Museum , situated in the grounds of the University of Melbourne.

In 1966, as well as composing a Toccata for Organ and Structure for Piano, he prepared a performing edition of Monteverdi's Orfeo. In 1967 his first publicly performed work, Mosaics for flute, clarinet, piano and soprano was presented at a Melbourne ISCM concert. During the year he assisted Humble in a remarkable series of Saturday morning contemporary music classes for local children.
His first major work for orchestra, Textures, was written in 1967 and was performed in the same year by the University Conservatorium Symphony Orchestra conducted by Keith Humble. The composition made a favourable impression and partly as a result of it, in 1968, Bonighton received the Dorian le Gallienne Award to compose String Quartet No. 2 .

Having gained his B. Mus., Bonighton was appointed Temporary Senior lecturer at the Music Department of Melbourne University.
During 1968-69, he also composed Three Pieces for Orchestra and Music for Sleep. In 1970 he continued at the Melbourne Conservatorium as a part-time tutor and was appointed Curator of the Percy Grainger Museum. In this year, Tout de Suite, for prepared woodwind and tape was performed at an ISCM concert, he gained his Masters degree and became President of the Melbourne ISCM. In 1971 he composed six works, all for local performers or groups, and prepared his thesis for a Doctorate of Music which he gained in 1972.

In 1974 he left Australia on a study/travel grant from the Music Board of the Australia Council to inspect electronic music studios in Europe. In London he undertook research at the EMS. studios, working with Peter Zinovieff and David Cockerill and worked privately with Tristram Cary. Later that year he was appointed lecturer in Electronic Music at the University of East Anglia, UK. In May, 1975, he died as a result of a road accident. In little more than ten years of creative life, Ian Bonighton produced 64 compositions and arrangements. His music is introspective and abstracted.

A pragmatist, he wrote for specific players or occasions. His electronic tapes were rarely presented alone; they are used in combination with conventional instruments or with dance, film or action. He was at pains to explain his music clearly or to simplify the technical language of electronic music. His scores are not virtuosic, but his tightly disciplined lines demand constant concentration by performers.
Firm religious convictions led him to church music, which forms one third of his output . Apart from the latin works, there are nine instrumental pieces exploiting the acoustics of church buildings, a sacred theatre-piece Herod, and the multi-media documentary Omega-Point.

Compositions by Ian Bonighton appear on