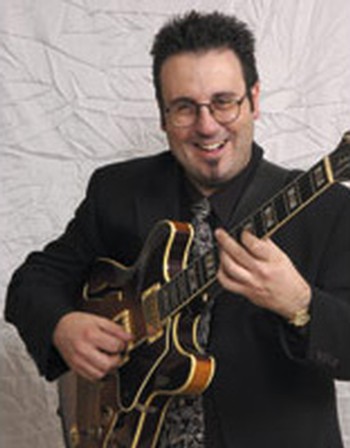 Jack is with the Northern Melbourne Institute of Tafe's Music Department, where he lectures in guitar, improvisation and runs a variety of performance groups. A strong love for improvisation is very apparent in Jack's playing, especially in the jazz style.

... I like spreading myself around to experience as many elements of the music business as possible (performing that is) so that every gig is a challenging learning experience working with different musicians ...

Jack Pantazis has been on the professional music scene for almost twenty years. His versatility and strong guitar skills have enabled him to effortlessly move between genres, from jazz to latin to rock and anything that has been required of him.

He has played with the Australian Pops Orchestra, the original group Black Taxi musical productions such as Rent, Sweet Charity and Les Miserables, his own group J. Company (jazz / groove material), TV appearances on Bert Newton's Good Morning Australia, the ABC's The Art Show and numerous pick up groups over the years.

A strong love for improvisation is very apparent in Jack's playing, especially in the jazz style.

His daytime commitment is with the Northern Melbourne Institute of Tafe, Music Department, where he lectures in guitar, improvisation and runs a variety of performance groups.

He is responsible for the ANZCA Modern Guitar Syllabus which he co-wrote eight years ago and for which he is also an examiner.

In 2000 Jack had the great pleasure of performing with Mike Stern in a workshop situation at NMIT. Since then Jack and Mike have kept in contact. Jack was in New York in 2001 to attend the IAJE Jazz Educators Conference and caught up with Mike at his ongoing Wednesday night gig at The 55 bar. He has also performed in the orchestra pit for the stage spectacular Mamma Mia and the Jack Pantazis Trio has been playing every Thursday night at a new Melbourne night spot, Scarlette.

Jack, who was a featured guest artist on Pete Michell's Quirky CD, is now exclusively heard on the JazzPlay label.