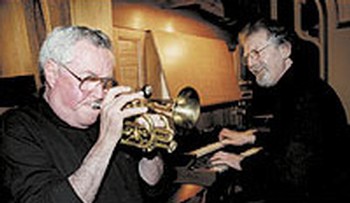 McJad (acronym of Melbourne Contemporary Jazz Art Duo) was an idea, a way-out idea, conceived and developed by Keith Hounslow in the early seventies. This was the concept - the duo extemporise on an original theme. Nothing remarkable about that you might say. Perhaps not, but the crux of the idea required the theme to be improvised too. Nothing to be pre-discussed, nothing to be notated. The musicians would begin to play and let synergy lead the way. Hounslow, trumpeter par excellence, found a willing and ideal collaborator in his friend Tony Gould, a creative pianist and distinguished music educator. The duo's collaboration proved to be uncannily empathetic. McJad, the idea became an exciting reality.

Later in the seventies under the aegis of Musica Viva, McJad gave concert performances to discerning audiences in Australia culminating with a tour of India in 1982 as artistic ambassadors for the cultural division of the Department of Foreign Affairs. The duo recorded two albums near the end of the seventies: Introducing McJad and McJad Miniatures. Both LPs were released on the Melbourne independent AIJA label - Australian Independent Jazz Artists.

After India, Keith went to live in Sydney. McJad would then only perform occasionally until 2000 when Keith proposed a new organic sound, hence their new CD, McJad Goes Organic.

McJad is featured on the following titles

For any artist to keep mind and ears open to ideas after 50 years of playing jazz in Australia is remarkable. Keith Hounslow - jazz trumpeter and cornettist extraordinaire - has a style that is melodic and expressive, bristling with eloquent lyricism.