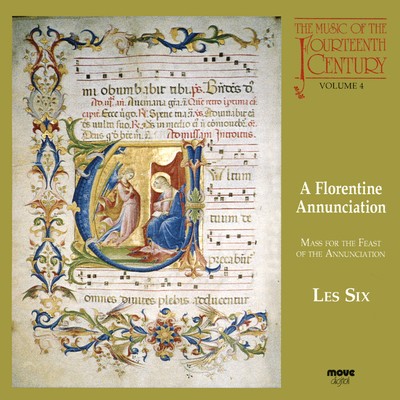 Mass for the Feast of the Annunciation - Patronal Feast of Santa Annunziata (Orbatello) via della Pergola, Firenze, 25 March 1417 (According to MSS Douai 1171 and Paris, BN it. 568)
Les Six

The Florentine year began on 25 March, as on that day the Christian world celebrates the Annunciation of the Virgin Mary, when it was revealed to her that she was to bear a son who would be the Redeemer.

This recording recreates the festive mass as it was performed in Florence in the early fifteenth century from a manuscript compiled by Don Paolo Tenorista, the most important composer of late-fourteenth century Italy, after Francesco Landini.

Accompanying notes provide fascinating details about the manuscript, detailed analysis of each section of the mass and translations. Includes a contemporary sermon by St Antoninus, Archbishop of Florence, delivered by Ivano Ercole.

A Florentine Annunciation - The Music of the 14th Century Vol. 4 is available for download from the iTunes Music Store.
It's available for streaming through Apple Music.

A Florentine Annunciation - The Music of the 14th Century Vol. 4 is available as as CD. It can be purchased online through Buywell Music or the Australian Music Centre which both offer secure online ordering.