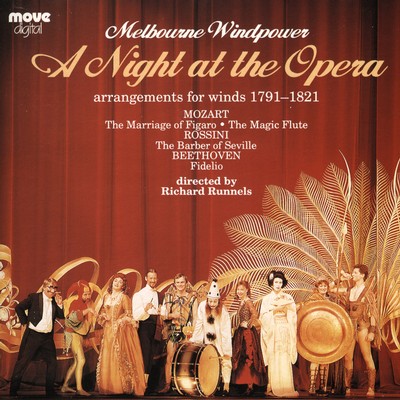 Well-known excerpts from Mozart's 'Marriage of Figaro' and 'The Magic Flute', Rossini's 'Barber of Seville' and Beethoven's 'Fidelio'.

Melbourne Windpower brings the late-18th century tradition of wind ensemble music to the present day. The members of Melbourne WIndpower perform with the State Orchestra of Victoria. Melbourne Windpower's first CD (Move 3082) has evoked excellent reviews, such as "Melbourne Windpower continues to impress with its stylish interpretations ... excellent performances ... sonorities and tunings between instruments almost ideal." (The Age). The group is directed by Richard Runnels whose first solo CD, Horn Destinations (Move 3106), has received critical praise, including "Enticing ... this recording is a delight." (The Age).

“... as deftly, imaginatively performed as it is inspired ... May Melbourne Windpower blow on forever.”

“The ensemble work, pitch and general finesse are of the highest calibre, while the liner notes are exemplary. Highly recommended.”

The Barber of Seville Gioacchino Rossini

A Night at the Opera is available as as CD. It can be purchased online through Buywell Music or the Australian Music Centre which both offer secure online ordering.