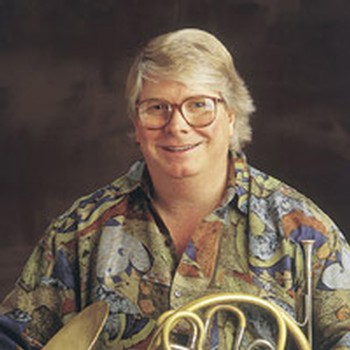 A graduate of the Interlochen Arts Academy, he attended Indiana University and the Salzburg Mozarteum. A former member of the Vienna Symphony Orchestra and artist-in-residence at the Victorian College of the Arts, he has performed solo and chamber concerts around the world. Richard Runnels made his conducting debut with the Australian Ballet in 1986 and his opera debut at Italy's Spoleto Festival in 1987.

Born in Dallas, Texas, USA Richard Runnels grew up in Cincinati, Ohio. He is a graduate of the Interlochen Arts Academy where he studied with Norman Schweikert. Richard attended Indiana University where he was a student of Philip Farkas and the Salzburg Mozarteum, where he was in the class of Michael Höltzel.

At the age of 21 Richard Runnels was engaged by the Vienna Symphony Orchestra, where he played third and first horn. He has performed with the Vienna Philharmonic Orchestra and in the Vienna State Opera. He has toured with Camerata Academia Salzburg and the Academy of St. Martin-in -the-Fields. As a member of the chamber music group ENSEMBLE 1 Richard has given concerts throughout Europe, the Middle East, Asia, USA, Carribean and Australia.

As a recitalist and soloist Richard has performed around the world including appearances at the festivals of Salzburg, Aspen, Edinburgh, Flanders, Spoleto and Melbourne. Chamber music partners have included Barry Tuckwell, Anton Dermota and Wolfram Christ, and as a jazz player he has worked with pianists as diverse as Dave Brubeck, Tony Gould and Horace Tapscott.

Richard Runnels first came to Australia in 1976 as Artist-in-Residence at the Victorian College of the Arts, Melbourne. In 1978 he was invited to become principal horn of the Elizabethan Melbourne Orchestra (now Orchestra Victoria), a position he still holds. Richard teaches at the University of Melbourne and the Victorian College of the Arts. In 1994 he was Visiting Professor at the Shanghai Conservatory of Music in China.

Richard Runnels is featured on the following titles

Richard Runnels is featured on the following titles