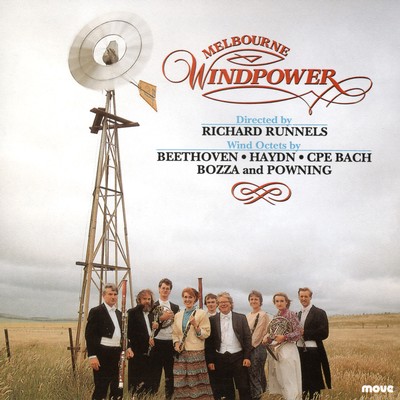 Melbourne Windpower is directed by American-born horn player Richard Runnels, principal horn of the State Orchestra of Victoria. A graduate of the Interlochen Arts Academy, he attended Idiana University and the Salzburg Mozarteum. A former member of the Vienna Symphony Orchestra and artist-in-residence at the Victoria College of the Arts, he has performed solo and chamber concerts (with ENSEMBLE I) around the world. Runnels made his conducting debut with the Australian Ballet in 1986 and his opera debut at Italy's Spoleto Festival in 1987.

“This recording has introduced me to the pleasures of wind music on this scale, and for this I am truly thankful ... This is a group very deserving of patronage ...”

“This is a superb ensemble. The group is solid in every respect: complex rhythmic sections, intonation, attacks, and releases.”

Melbourne Windpower is available as as CD. It can be purchased online through Buywell Music or the Australian Music Centre which both offer secure online ordering.