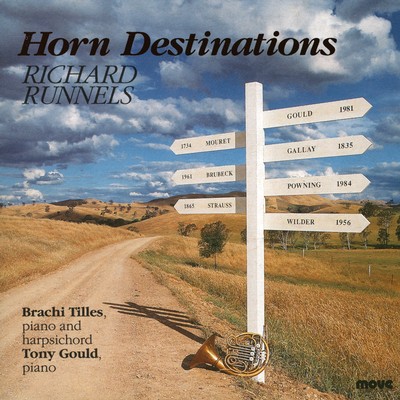 Richard Runnels, principal horn player for the State Orchestra of Victoria takes centre stage in a program of horn music spanning several centuries - from the elegance of 17th century France through Franz Strauss, completing the tour with several Australian pieces, including 'Duet' by Tony Gould.

“an interesting release ... a program of considerable diversity ...”

“In covering so much musical ground, he has been able to colour his playing with many shades of sound, thus broadening the horizons of his instrument to a sphere most would not assume possible.”

“Runnels effortlessly entices the listener to explore unknown territory. His playing slips easily from the courtly manner of Jean-Joseph Mouret ... to the likes of Dave Brubeck ...”

Divertissement in B flat Jean-Joseph Mouret

Horn Destinations is available as as CD. It can be purchased online through Buywell Music or the Australian Music Centre which both offer secure online ordering.