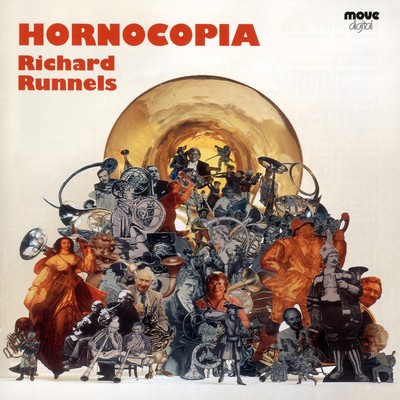 A must for all French Horn players!

With 110 minutes of music from the classical to the contemporary. The most famous pieces for horn and piano – Beethoven's 'Sonata in F, op. 17', Schumann's 'Adagio and Allegro, op. 70', Dukas' 'Villanelle', Poulenc's 'Élégie', Hindemith's 'Sonata in F' and more.

A valuable disc for horn students and teachers, most of the repertoire is drawn from the AMEB and VCE syllabuses. The premier recording of 'Rotations' for sixteen horns by American composer Ronald Caltabiano, on which Runnels performs all 16 parts is the highlight of this wonderful collection.

“On this two disc set ... all is perfection and there is no doubt that Richard Runnels ... is among the elite of his craft. As a compendium of horn playing ... at its very best, these CDs are valuable.”

“It is a terrific set, especially for those new to collecting recorded horn repertoire, for this is a great 'one-stop-shopping' source of the mainstays.”

Hornocopia is available as as CD. It can be purchased online through Buywell Music or the Australian Music Centre which both offer secure online ordering.