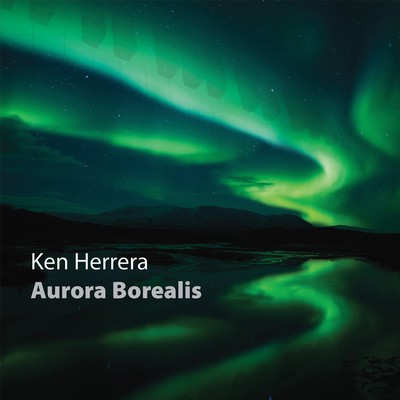 Ken Herrera’s second disc of solo piano works, Aurora Borealis, continues his odyssey into other worlds of sound. The shimmering luminescence of the title suite melds with the cheerful simplicity of the Three Dances. The poignant harmonies of the Second Nocturne give way to the exotic rhythms and Andalusian verve of the Flamenco Sketches. Crowning the disc, Herrera’s second piano sonata is a bold and ambitious work, brimming over with fire and pathos.

“As the title and the cover suggests the focus of this disc are the ever amazing Northern lights. I decided to play some of this music whilst watching some YouTube videos of the Northern Lights on my big screen TV. The effect was quite mesmerising funnily enough, it seemed to work best with the Second Nocturne which is sparse, elegiac work but whose mood fits the title and provide a perfect back drop to viewing the dancing lights of the north. The actual Aurora Borealis work itself is a short three movement foray where the final movement itself, marked maestro, is indeed majestic yet light in colour and gives the impression of the varying levels of light as they may be viewed with the naked eye. Herrera's use of musical induction in evident throughout the second piano sonata. He assumes and individuality of sound combined with a variety of compositional techniques including some counterpoint in the first movement. The second and third movements offer a proof of his original premise that sound is not formed from just notes on a page but rather a translucence of reflective shimmering that, in this album, is portrayed by those mixtures of green hello and red lights flooding the night skies. It is evident that Herrera is a talented composer with an excellent knowledge of the piano and the skill to write effectively for it. The most interesting disc by an Australian composer in quite some time.” ★★★★

Aurora Borealis is available as as CD. It can be purchased online through Buywell Music or the Australian Music Centre which both offer secure online ordering.