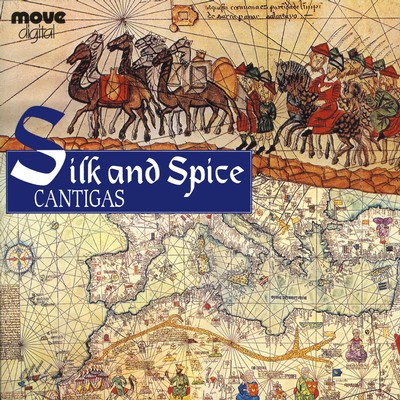 “Melbourne seems so filled by talented musicians of every type that it seems inconceivable that Melburnians need ever buy CDs by anybody but the people who live next door or in the next suburb. A fanciful suggestion? Not if you look at the number and variety of local musicians who have been recorded by Move Records during the last twenty years or more/ Not if you add the productions of many other labels, small and large, forever giving opportunities to our most talented people. If Melbourne is not musical Utopia, it's not the fault of the record companies. It's our fault; yours and mine, O Melbournians, No matter what happens, we by the overseas stuff instead of records like Silek and Spice by Cantigas. These five musicians from Melbourne play between them at least Thirteen instruments, including the out, the rebec, and the hurdy-gurdy. With these instruments from medieval European and Arabic times, they recreate the sounds of the towns and highways of nearly a millennium ago, without sounding in any way old fashioned. Instead of sounding precious, Silk and Spice has all the excitement of music, Silk and Spice has all the excitement of music you have been waiting to hear all your life, but have never quite met before.”

Silk and Spice is available as as CD. It can be purchased online through Buywell Music or the Australian Music Centre which both offer secure online ordering.