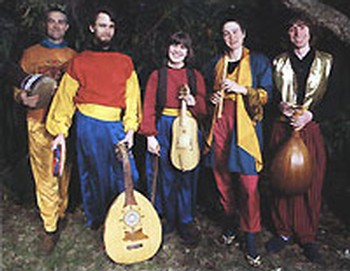 Cantigas plays a repertoire of mediaeval and folk-based music from Europe, Asia and the Middle East. The group explores instrumental sounds and timbres using hand-crafted Australian reproductions of period instruments. The group generally plays in mean-tone temperament and at the pitch A466 as it is believed that pitch in the Middle Ages was higher than the standard A440 that we use today. The music is all monophonic, that is single line melodies and in most cases merely fragments.

Cantigas is featured on the following titles

A collection of traditional melodies from the important courts of Spain, France, Egypt and Jerusalem in the Middle Ages.

Mediæval and folk-based music from Europe, Asia and the Middle East – inspired by the centres of barter and exchange grouped along busy trade routes.