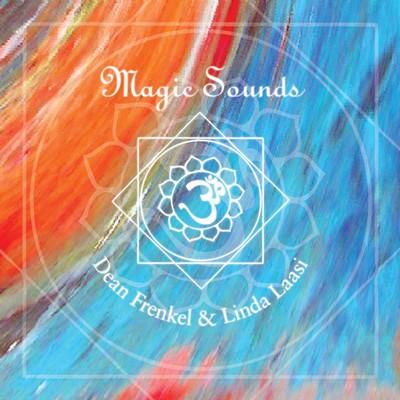 It is a music journey of sacred sounds, uplifting soundscapes and original composition. It is quite uniquely sourced from authentic human voices (not electronic synthesizers) featuring vocal instrumentation, an approach to singing which far pre-dates songs. Vocal musicality is deeply embedded in the human genome, with far more ancient evolutionary roots than spoken language.

The entire album features the natural voices of Dean Frenkel and Linda Laasi except for Arrayah's magnificent crystal bowl playing on three tracks (Crystal Palace, Rain Chant and Watery World), didgeridoo on two tracks (Australian Soundscapes and Magic Sounds), harmonium on one track (Magic Sounds) and jaw harp on one track (Watery World). The artists adopted a minimalistic approach to allow the harmonic tones, usually hidden within music, to come alive within the vast space.

Vocal Harmonics
Vocal harmonics is the world's oldest surviving form of singing with a history clearly exceeding 10,000 years. It continues to be practised by over 20 mainly indigenous cultures around the world including Mongolians, Tibetans, Tuvans, Canadian Inuits, Siberian Eskimos, the Ainu tribe of Northern Japan (lost is last singer in 1976), Sardinians, tribes both in Africa and Taiwan, the Huli tribe of Papua New Guinea,
people from Nagaland, India, et al. Culturally, it is an extraordinary link to sophisticated skills from our primal past. In Mongolia, Tuva and other traditional herding cultures, throat singing continues to calm and mesmerise animals much like modern day horse whisperers. Yet shamans and monks from other cultures continue to apply vocal harmonics for their spiritual practices and it is perhaps symbolic that the Dalai Lama, Mahatma Gandhi, Nelson Mandela and Genghis Khan all share different techniques of harmonic throat singing in their regional cultural heritage.

1 Northern Dreams
Before the last ice age, Alaska and Siberia were connected by a land-bridge. Then 10,000-14,000 years ago the the ocean rose about 100 metres to form the Bering Strait. To this day there are traditional throat singing cultures on both sides. Northern Dreams features dreamscapes of ancient harmonics near the top of the world.

2 Magic Sounds
The lyricism of sounds emerged long before words were invented.

3 Moon Bear Mantra
As custodians, we are the only species with the power to determine the future survival of all life on this planet. This is an incantation of human compassion for all living creatures.

4 Australian Soundscapes
Australia has vast continental space for resonating harmonic soundscapes. In Northern and Central Australia indigenous Australians have been resonating the land for many millennia with didgeridoo and chanting. Australia indeed is a place of magic sounds.

5 Crystal Temple
Crystal Temple is a place of cleansing and healing. It is a time of fluency and gentle freedom. At times it can be hard to detect the crystaline sounds of the voice from the crystal bowls.

6 Short Song
Long Song is a cherished traditional practice of Mongolia where syllables are articulated in slower motion. Short Song is a long song which explores the throat-driven harmonics of one of the Mongolian Kargyraa techniques. It is also probably one of the shortest pieces in recorded history.

7 Night Lights and Whale Callers
There is a surprising tradition of whale-calling by the Saami of Finland and shark-calling by Papua New Guineans and Tongans - amazingly their efforts actually attract these awesome sea creatures. Linda sings the night-lights and Dean sings the ocean and a brief interlude of night-light harmonics.

8 Space in Timelessness
The freedom of flying solo navigations into outer space with stars shooting, glittering and soaring in a rhythmic time. It is also a journey of connecting outer limits with the inner space of meditation.

9 Rain Chant
Traditionally shamans in many countries have ceremonial tasks of: communicating with ancestoral spirits, healing the sick, finding people lost in the forest and beckoning rain from the skies. Dean sings a rain chant, his jaw harp plays droplets of rain and Arrayah plays the rain on her crystal bowls.

10 Watery World
With the rain recently past, billions of water crystals have enveloped the ground replenishing the thirsty land. As the land absorbs water, the ecosystem readies itself to spring to new life.

11 Sleeping Caves
Every sleeping place is sacred. It is a place to put consciousness to bed, rest the body and refresh the mind. It is our most primal and least understood cycle of all. When we are asleep our dreaming state awakens, when we are awake it mostly sleeps. In Sleeping Caves the two voices start on their own path and eventually converge.

12 Southern Dreams
The sleeping state weaves into dreaming states of comfortable healing journeys. Clouds of sleep drift and glide into dreamscapes of sounds made from southern Australia. Unrestricted by body, time or space, the final track Southern Dreams rounds off the album as it connects with the opening track Northern Dreams.

Magic Sounds is available as as CD. It can be purchased online through Buywell Music or the Australian Music Centre which both offer secure online ordering.