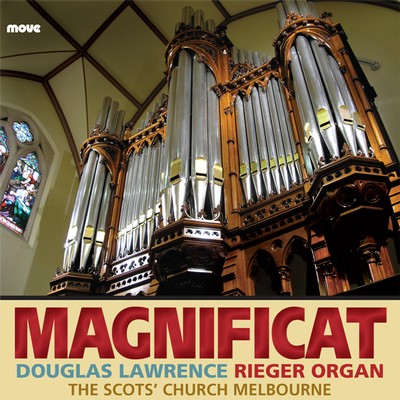 The Song of Mary "My soul magnifies the Lord, and my spirit hath rejoiced in God my Saviour" (Gospel of Luke 1:46-55) has inspired composers through the ages.

This disc begins with the Fuga sopra il Magnificat by JS Bach and also holds movements from two Magnificat Suites by Michel Corette. The title also reflects the magnificence of the Rieger organ in the Scots' Church, Melbourne.

The disc explores some of the wonderful, intensely musical sounds of this great instrument. Installed in Scots' in the year 2000, it has drawn outspoken praise from many of the world's most eminent organists.

The listener will hear the distinct registrations used for German and French music. This is most clearly demonstrated in the earlier works where the German repertoire is based on the Organo Pleno - a sound based on the mixtures of the organ, while the French repertoire is founded on the sound of the reeds (trumpet, clairon, cromorne, voix humaine). It is, I trust, a fascinating juxtaposition of the sounds of the two schools of organ composition and is most certainly a tribute to the voicer of this organ, Oswald Wagner.

The music covers a period of 300 years from Dietrich Buxtehude who was born in 1637 to Jehan Alain who died in 1940.

“This is the second such recording to feature the recently built Rieger Organ in The Scot’s Church in Melbourne, Australia and after hearing it, I am absolutely going to seek out the first.

This well-conceived program shows off the versatility and character of this remarkable instrument...What this recording shows off remarkably well is the versatility of the instrument...Perhaps the most impressive track on the entire outstanding disc is the Buxtehude Prelude and Fugue. All of the voicings are remarkably clear, and Lawrence displays fine rhythmic dexterity and purpose. The massive 32’ brass bass pedals are stunning...Organists and connoisseurs will enjoy the booklet which contains the specifications for the Rieger Organ as well as an internet website address for more information. The booklet also contains mini-essays, presumably written by the organist, which give insight into the registration used for each piece and information on the composers. But whether one is an organist, lifelong enthusiast or novice, there is plenty to enjoy in this disc. Turn it up and enjoy the majesty of the Rieger Organ.”

“On each track of this anthology (but above all in the German baroque material, to which lesser players too often impart an overwhelming stodginess) Lawrence demonstrates his keen gift for registrations at once idiomatic and ear-catching. Whilst perhaps the recording quality lacks the ultimate in-your-face vividness, the Mendelssohn fugue’s concluding bars will give any speakers a good workout. Further adorning the package are the performer’s own user-friendly booklet notes, a comprehensive stop list, and – a captivating touch, this – sung versions of the chorale melodies Bach employed. What’s not to love?”

“Douglas Lawrence presents a wide spectrum of works ... beginning with Bach, Buxtehude, Walter, Mendelssohn, Corrette, Pierne, Boely and Alain. All are accomplished with the performer's trademark confidence ... But the real star of the CD is the Rieger organ, an instrument of splendid responsiveness and clear-speaking variety of timbres ... even in its quieter moments is loaded with celebratory ebullience.”

Prelude and Fugue in C minor, Op. 37 No. 1 Felix Mendelssohn

Magnificat is available as as CD. It can be purchased online through Buywell Music or the Australian Music Centre which both offer secure online ordering.