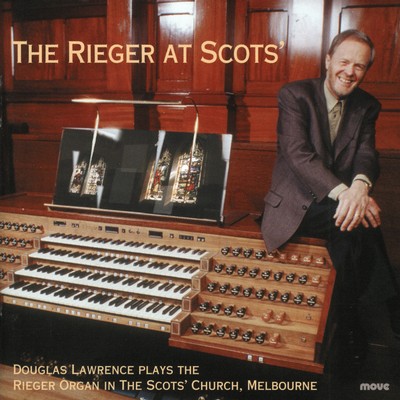 On one disc it is not possible to give more than an aural glimpse of the endless possibilities in an organ as fine as this one. Nonetheless, there are magical sounds here and the listener will hear examples of many classical registrations from the great periods of composition.

This album is the premiere recording of the Rieger Organ at The Scot's Church, Melbourne. The organ, new at the time of this recording, contains four-manuals and 68 speaking stops. It was designed in association with Douglas Lawrence and the church's organ committee.

“one of the few organs in Melbourne that suits its home building in acoustic and timbral richness ... a program of music that was calculated to unveil even more qualities of colour and sonorous brilliance in this richly resourced organ ... fluent and engaging playing”

“Many of the works will be familiar, but they have an added dimension performed on such attractive tonal resources ... The sleeve notes are most comprehensive, as we have come to expect from MOVE ... a worthy aural tribute to one of our finest new instruments ... an excellent achievement!”

“The playing is assured ... This is a splendid disc ... a rewarding listening experience”

“the program is captivating ... the playing is vintage Lawrence and the recorded sound sumptuous.”

“Lawrence's playing is excellent throughout ... the balance and ambience are excellent ... altogether a highly successful first aural outing for the Rieger, and a credit in every way to all concerned.”

The Rieger at Scots' is available as as CD. It can be purchased online through Buywell Music or the Australian Music Centre which both offer secure online ordering.