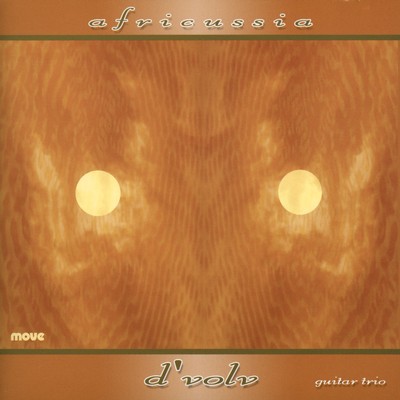 On africussia, d'volv's second album and their first for Move, you'll hear an exciting blend of diverse performance techniques and compositional styles PLUS a bonus video featuring d'volv live! Jim Kelly, Peter Martin and Jon Fitzgerald individually have years of performing experience on guitars. Collectively as d'volv they drew from their decades of knowledge to produce the music on this disc which is well suited to those seeking a refined listening experience.

“always flashes and sparks with animation ... fastidious arranging ... exemplary recording ... imaginative improvising ... This is to music to what candles are to light.”

“Three guitars combine in africussia to offer a time-passing-pleasantly exposition of the skills of three remarkable Australian players and composers ... the program offers a range of musics ... all of which ensures an absorbing exploration of the possibilities of the combination of instruments.”

“a delightful blend of third-stream jazz, blues, classical, folk and flamenco ... a quality disc with elegant arrangements and technique to burn.”

“a trademark sound ... a pleasing meld of timbral qualities ... Deep Tango Blue and Feel No Pain are outright successes”

africussia is available as as CD. It can be purchased online through Buywell Music or the Australian Music Centre which both offer secure online ordering.