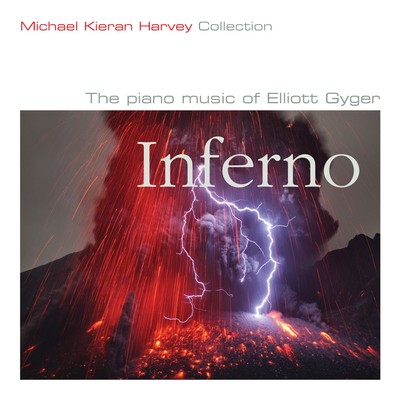 Inferno (2013) is an hour-long cycle for solo piano written for Michael Kieran Harvey. Powerful images from Dante’s vision of Hell provide programmatic starting-points for a series of pieces whose internal logic is nonetheless purely musical. The vocabulary imprisons powerfully expressive gestures within tightly controlled structures, creating Lisztean tableaux of virtuosity and damnation influenced by Messiaen, Carter, Ligeti, Birtwistle and other giants of the post-war avant-garde.

The cycle consists of nine Etudes for the nine Circles of Hell, framed by four brief Interludes corresponding to the Rivers of Hell, together with a Prelude and Postlude. Each Etude explores a different subset of the piano’s range, moving gradually downward and alternately expanding and contracting across the cycle. All four Interludes, by contrast, traverse the same harmonic field spanning the entire range of the instrument, as well as the same metrical structure. Another recurring element is the transposition of Dante’s distinctive terza rima (three-line stanzas with interlocking end-rhymes: aba bcb cdc …) onto musical parameters.

was written for Simon Docking. In navigational terminology, the “variation of the compass” is the difference between true North and magnetic North. As one travels large distances across the world, this discrepancy varies continuously, from zero to a maximum of 180° at certain places in the Arctic and Antarctic.

The idea of gradual change, of the successive divergence and convergence of the compass needle on true North, is mirrored in the large-scale shape of Compass Variations in a number of ways: the lengths of sections alternately contract and expand, and the density of texture fluctuates between simple and complex. The tempo structure – starting at a moderate tempo and moving outwards to the extremes, so that the last two sections are the slowest and fastest respectively – could also be likened to a wildly swinging compass needle.

However, the two words in the title also have more specifically musical connotations. There is a long and illustrious tradition of variation sets for keyboard, from the Fitzwilliam Virginal Book onward. However, like other 20th-century examples of the form (notably the key masterpieces by Webern and Copland), this work comprises explorations of different ways of using the piano, rather than primarily variations on a theme.

Compass Variations focuses on two characteristics unique to the piano. Firstly, it exploits the whole of the instrument’s 88-note range (or “compass”), using the extreme high and low registers not merely for colour but as an integral part of the musical fabric. At some points, a single melodic line spans several octaves, and contains huge leaps from one note to the next – a melodic style of which no other instrument is capable. And secondly, each of the work’s eleven variations calls for a different style of “touch”, that elusive quality which is so central to the art of playing the piano. While the musical material is stylistically consistent, the manner of playing ranges widely, “encompassing” keyboard styles from Bach and Chopin, through Liszt and Scriabin, to Webern, Prokofiev, Takemitsu and Boulez.

“'Inferno' is a divinely demanding work executed by a masterful interpreter of state-of-the-art piano music. Such an uncompromising compositional approach has the potential to deter some audiences, however both the force of Dante’s imagery and the sheer boldness of the playing compel all ye who enter here.”

“Michael Kieran Harvey is a formidable presence in Australia's new music scene. An outspoken advocate for homegrown musical fare, he has championed the works of composers such as Carl Vine. His crusade continues with these two solo piano works by Elliott Gyger. Sydney-born but Melbourne-based, Gyger has earned an impressive list of accolades, including most recently the Sydney Symphony 80th Anniversary Composition Prize. The title track is the monumental Inferno (2013), named for the fist part of the Divine Comedy. Gyger re-imagines Dante's depiction of hell and its creatively conceived punishments, using his own dramatic and variegated musical language. Rivers of bleed and ice, hail and snow beating relentlessly against doomed sinners, ferocious winds and forests of harpies provide the impetus for this 15-movement work of devilish difficulty. Navigating the nine circles of Hell (plus for rivers) in just under an hour, the music culminates in a beautifully serene depiction of the starry night sky. Compass Variations (1993) follows, a compelling work exploring concepts of direction, and orientation. Gyger's music is imaginative and brilliantly conceived, and Kieran Harvey's performances are flawless. Nevertheless, this is indispensable for minds ready to take the plunge into a fascinating sound world.” ★★★★

Inferno is available as as CD. It can be purchased online through Buywell Music or the Australian Music Centre which both offer secure online ordering.