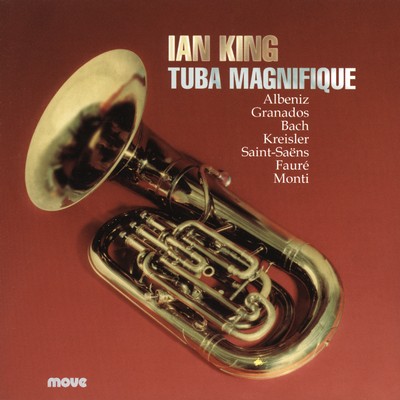 This album includes performances of works by Albeniz, Granados, Bach, Saint-Saëns, Fauré, Monti and Kreisler.
There are also two rare gems for tuba and strings from his 1950s album, Tuba Fantastique. Other tracks have been compiled from contemporary recordings undertaken in 2000 at the Move Records Studio, a live recording from an Assembly Hall, Melbourne performance in 1969 and studio recordings conducted in the 1960s.

“The album comes to life, variously with vibrancy and mellowness and with such conviction that one is inspired to rummage for more riches ... an important addition to the tuba's meagre discography.”

“an excellent resource for school students ... Ian King demonstrates the extensive range and technique of the tuba”

“I really love this recording ... such a wonderful selection and so exquisitely played ... Forget the cello – the Tuba has it!”

Tuba Magnifique is available as as CD. It can be purchased online through Buywell Music or the Australian Music Centre which both offer secure online ordering.