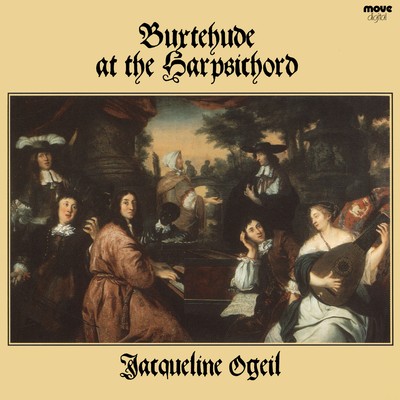 J.S. Bach walked 200 miles to hear him play and nearly lost his job, Handel in his usual manner 'borrowed' the opening theme from his 'Prelude in G' to use as the theme in "And he shall purify" from the 'Messiah'; Brahms, Pachelbel, Bruhns and Mattheson were all inspired by him. His fame was widespread even in his day and he is frequently referred to as the most significant organ composer before Bach.

In 1739, Mattheson bemoaned the fact that while Buxtehude was well known for his organ works his keyboard works were never published, despite being of a high order.

Acclaimed harpsichordist Jacqueline Ogeil has put together a CD of Buxtehude's harpsichord works, most of which were only found as recently as the middle of the twentieth century. Written in the popular idioms of the Baroque period, the gigue, the suite, aria and variations, they are light and entertaining works of a secular nature.

Despite Buxtehude's fame, the painting on the front cover of the CD, Johannes Voorhout's Domestic Music Scene Hamburg 1674 is the only known painting in which he is represented. Buxtehude is seated second from the right with the music from one of his cantatas on his lap. Jacqueline Ogeil, believing it is important for the listener to be introduced to the context of the music through a historical image, finally secured permission to use this painting after six months of negotiation with the museum in Hamburg.

Jacqueline Ogeil's harpsichord is a copy, by Marc Nobel (Melbourne 1988), of a 17th century Flemish instrument by Jean Couchet. Its pitch is A=415, and for this recording it is tuned in a well-tempered system such as was used by Buxtehude in his later years.

“High orders of achievement in the music and in the playing and recording inovlved in this disc earn it unqualified recommendation.”

“Confirms her status as a truly world-class harpsichordist”

“So this disc can be doubly welcomed firstly as filling a gap in our knowledge of pre-Bach keyboard music and secondly for Jacqueline Ogeil's brilliant performances.”

Buxtehude at the Harpsichord is available as as CD. It can be purchased online through Buywell Music or the Australian Music Centre which both offer secure online ordering.