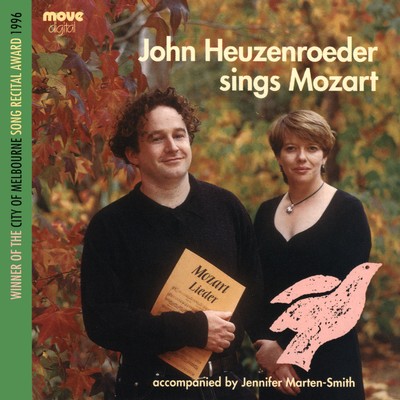 John Heuzenroeder's winning performance was described by the judges "as one which struck them as having a most unusual sense of style — a performance you know you will long remember."

On this disc John's beautiful tenor voice floats through a selection of both well-known and rarely heard Mozart lieder. Joined by consummate pianist and seasoned opera repetiteur, Jennifer Martin-Smith, John sensitively interprets the full joy of life and nature inherent in these Mozart songs.

“... this recital ... reveals a voice of intoxicating sweetness used with skill ... commands attention among illustrious peers.”

“This disc is highly successful and eminently enjoyable to listen to ... This disc is a must for all music lovers.”

“The star of this CD is the singer himself. Heuzenroeder has a fine lyric tenor voice which makes these songs sound deceptively straightforward, navigating the higher end of the tenor range with no signs of strain. It is this masterly technique which allows him to put everything into the interpretation of the songs which come alive ... strongly recommended”

John Heuzenroeder sings Mozart is available as as CD. It can be purchased online through Buywell Music or the Australian Music Centre which both offer secure online ordering.