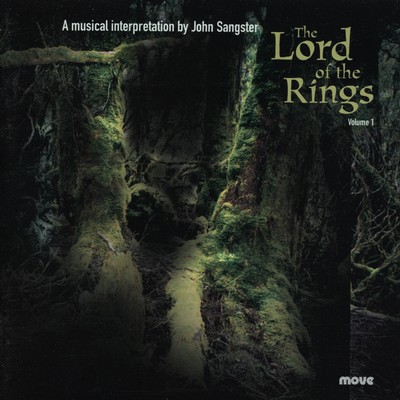 Two CDs for the price of one!

"If you want a musical autobiography, it's all there in the Lord of the Rings albums. A crazed montage of all the jazz (and other) idioms I've been involved with during my life. All the musics I love are in there; some plainly stated, some distorted and disguised a little bit the way memories sometimes go."
(John Sangster, 'Seeing the Rafters')

Not to be confused with Howard Shore's music to the award-winning films, this trilogy is wholly Australian and was released on three double-LP sets by EMI in the late 1970s and have been unavailable for many years. Sangster's complete Lord of the Rings trilogy, together with an equally rare fourth double-LP set, Landscapes of Middle Earth, has been carefully restored.

“Long overdue is the reissue of the seminal 1974 recording from the free-thinking hellraiser of Australian jazz. The scope and production values in this reworking of Tolkien's epic are nothing less than ambitious ... [a] stellar line-up ... It bristles with humour and gorgeously layered orchestrations. Breathtaking solos, too.” ★★★★

“Hats off to Move Records for giving us John Sangster's 1974 classic ... It is a tribute to the man as a composer, player, bandleader and conceptualist that he could pull off such an ambitious project ... Rambunctious trad, skating post-bop, innovative percussion, string quartets and even experimental studio remixes all happily cohabit Middle Earth. What brings them together is the warm heart of Sangster, and a strong sense of joy in the making of the music ... Enchanting.”

“an exciting musical journey that swings from the chaotic to the celebratory and seduces with passages of extraordinary beauty and pathos.”

“The whole piece intrigues, excites and entertains ... enhanced by film footage and artwork accessed on the two hybrid CD/CD-ROM discs”

“Move Records is to be praised for its salutary efforts at making these important artifacts of musical history once again available to the public ... this CD (and its promised successors) is an essential item for any die-hard collector - Tolkienian and Sangsterite alike. These albums are legendary ... The newly released double CD set is a Cadillac with all the luxury features one expects from a special edition DVD”

“This is a jazz album, inspired by the Tolkien tale but interpreted in a jazz way, not as a soundtrack to a narrative. So much can be said of this blockbuster but a few essentials stand out: the scope of the writing, its constant authority and control, despite its litany of jokes, effects and general bonhomie. The quality of the musicians ... amount[s] to a roll-call of the best players of the day ... an amazingly detailed and rich recording.”

“I was knocked out by the quality of the music ... Move Records have done a magnificent job”

“magical music most worthy of the subject matter ... Only the mind of Sango the Great, part Hobbit, part wizard, could have come up with such a wondrous musical phantasmagoria.”

“worth the listening ... the performances stand up well ... an Australian milestone.”

“Do yourself a favour - listen to these CDs”

“a real hit ... the quality is even better than the original vinyl releases.”

“this impressive work is a milestone in Australian jazz history ... splendid”

“Some of the most important music to come out of Australia as it shows the way out for the impasse modern classical music finds itself in, and it gives new direction to jazz”

“... masterly jazzman John Sangster gets some fine moments together ... this is a superb album that gains appreciatively by use of talents like Bob Barnard, Graeme Kayla, Errol Buddle (and) many many more. Outstanding track 'Vale Theoden'.”

The Lord of the Rings, Volume 1 is available as as CD. It can be purchased online through Buywell Music or the Australian Music Centre which both offer secure online ordering.