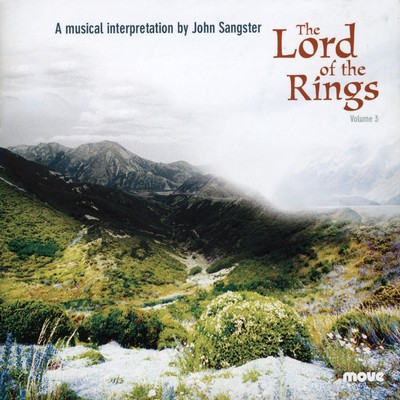 Not to be confused with Howard Shore's music to the award-winning films, this trilogy is wholly Australian and was released on three double-LP sets by EMI over 25 years ago, long deleted and remaining unavailable for many years.

The series remains a highly ambitious and epic production. Musical styles range from Sangster's distinctive form of trad and modern jazz, to film-like music interpreting characters and events from Tolkien's trilogy. There's something on this special double CD for everyone. Plus there's extras galore for collectors including the original LP artwork (computer PDF files), four live performances in MP3 format, and another long interview with Sangster made a year before he died in 1995.

The bonus material on Volumes 2 and 3 is particularly rich, including recorded interviews with musicians who played on the albums, recounting their experience of the Lord of the Rings sessions. Also included are also two lengthy interviews with John Sangster himself. This precious oral testimony provides not only an essential context for appreciating Sangster as a musician, but reveals something of the lighthearted and unassuming spirit of the man behind the music, a spirit that infuses that music with its own individual quality.

So... having read the book, visited the Ring website, and seen the film trilogy, you can now hear the jazz music: an essential album for any Australian jazz or indeed Tolkien fan.

“... the idea of painting musical pictures of strange characters was irresistible to Len Barnard, Bob Barnard, Graeme Lyall and a cast of thousands ... on comes a warm ballad like 'Arwen's Regret' which has Don Burrows playing as soulful a baritone as we've ever heard.”

“Like any great opera, Sangster's trilogy must be heard in its totality in order for the evolution of his vision to be fully appreciated. The albums become more complex and their instrumentation more subtle as they progress, gradually creating their own 'secondary world' of musical reference. A delight to listen to.”

“The re-mastering is of the usual superb quality we have come to expect from Move and the added bonus tracks, interviews, etc round out a brilliant product.”

“Move's remastering of the original material makes the music sound as though it was recorded yesterday! The playing of the John Sangster Quartet bonus tracks, dating from 1989 is absolutely splendid”

The Lord of the Rings, Volume 3 is available as as CD. It can be purchased online through Buywell Music or the Australian Music Centre which both offer secure online ordering.