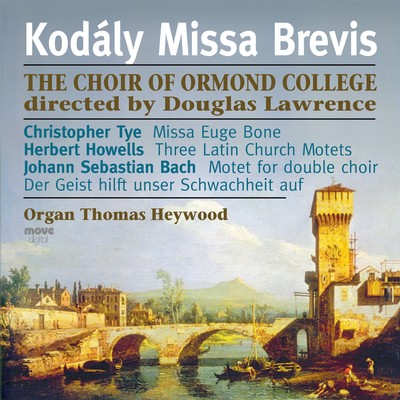 Kodály's 'Missa Brevis', composed in the dark years of World War II, with its haunting melodies reflects both the horror of the period and Kodály's understanding of the capabilities of the voice. Soaring and penetratingly beautiful solos are combined with sections for the full choir to create drama and passion.

The 'Missa Brevis' was recorded in the stunning acoustics of the 17th century Martinskirche, near Lake Constance in Southern Germany with accompaniment provided by organist Thomas Heywood, on a wonderful new Rieger organ.

The Tye, Howells and Bach were recorded in the 15th century Santa Maria Bressanoro in Northern Italy.

“Throughout this seldom recorded repertoire, the choir exhibits good intonation, particularly in the a capella works, and a real sense of artistry, bringing a crisp and precise style to bear on this often difficult music. Kodály's mighty 'Missa Brevis', composed in 1944, gives the choir ample opportunity to showcase its excellent solo singers.”

“the highlight of the disc - a beautifully modulated and expressive performance of Bach's joyous motet 'Der Geist hilft unser Schwachheit' ...With no reservations, this is a disc to delight lovers of fine choral singing.”

Kodaly Missa Brevis is available as as CD. It can be purchased online through Buywell Music or the Australian Music Centre which both offer secure online ordering.