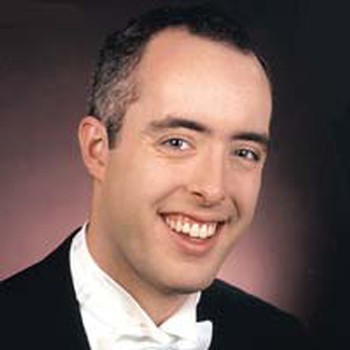 Born into a Melbourne musical family in 1974, Thomas Heywood is an honours graduate of the University of Melbourne. Since 1994 he has held the coveted position of Organist and Choirmaster of St John's Anglican Church, Toorak, where he presides over the famous Hill organ, directs the Choir and plays for over 300 services each year.

He maintains a demanding schedule of performances, with around 80 solo recitals each year as part of the 'Victorian State Organ Concerts' - an annual concert series which he founded with his wife Simone.

He has performed at concert halls, town halls, cathedrals and churches throughout Australia and New Zealand including an acclaimed recital at the Sydney Opera House at the age of 17.

He has inaugurated many new and restored organs around Melbourne and Sydney, and has performed in several concerts with the Melbourne Symphony Orchestra. In 1994, the City of Melbourne presented Thomas in a year-long series of Grand Organ Concerts at the Melbourne Town Hall - the first time such a series had been presented for 50 years.

Internationally, he has played organs throughout the USA including a performance on the world's largest playable organ in Philadelphia. He has also performed in Austria, Denmark, Germany, Ireland and Italy, in cities including Berlin, Munich and Vienna - where he received a standing ovation at St Stephen's Cathedral.

He has made several highly-acclaimed recordings, and his playing has been broadcast nationally on ABC-FM. As a performer he is regularly heard on 3MBS-FM and other MBS stations throughout Australia.

In 1997, Thomas founded a popular series of annual Grand Organ Concerts at St John's Toorak, in which he performs programmes compiled exclusively from masterpieces of the concert organ repertoire.

‘Heywood's technique is immaculate, his projection of the music positively three-dimensional, and his obvious enjoyment of the task radiates through the notes, catching up the listener and carrying us along the way.’
(Organists' Review)

‘Heywood's playing is versatile and vigorous ... powerful yet subtle, sonorous yet never overwhelming.’
(The Melburnian)

Thomas Heywood is featured on the following titles