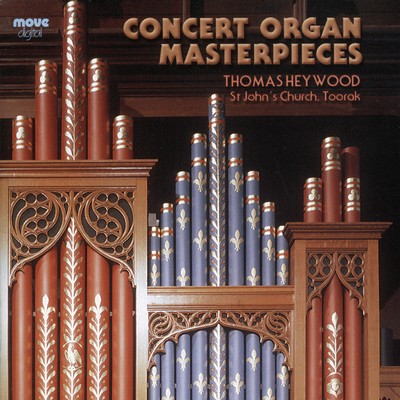 In 1997, acclaimed organist Thomas Heywood founded a series of annual Grand Organ Concerts at St John's Church in Toorak, Melbourne, in which he performed programs compiled exclusively from the masterpieces of the concert organ repertoire.

The St John's Church organ is a versatile and exciting musical instrument and the music on this CD has been specifically chosen to display its full capabilities. Romantic organ works as well as virtuosic transcriptions of compositions originally written for other instruments are featured, including the "Overture" from "The Magic Flute", Debussy's "Clair de lune", Dvorák's "Largo" from "The New World Symphony", Rimsky-Korsakov's "The Flight of the Bumble Bee" and Lemare's "Concertstück".

Pictured on the CD cover, the magnificent Hill Organ was originally built by the distinguished English organ building firm of William Hill & Son in 1913. In 1961 it was completely rebuilt to modern tastes, which unfortunately were a poor contrast to the original plans.

In 1994 the decision was made to restore it and the noted Sydney firm of Peter D.G. Jewkes Pty Ltd were employed to return the instrument to Dr Hill's original concept of 1913. The restoration took over 14 months to complete. A new console was constructed, the pipe work and internal configuration were returned to their original configuration, the organ case was restored and the facade pipes were stencilled and gilted by the acclaimed Melbourne artist Marc Nobel.

The restored instrument is ideally suited to the music of the Romantic era and is one of the finest organs in the country. As the largest Edwardian church in Melbourne the St John's organ is a magnificent vehicle for recitals as well as an invaluable musical resource to both the parish and the wider community.

“Good marks for original programming. The organ's sound is good ... the notes are excellent”

Organ Concerto No. 2 in B flat major George Frideric Handel

Concert Organ Masterpieces is available as as CD. It can be purchased online through Buywell Music or the Australian Music Centre which both offer secure online ordering.