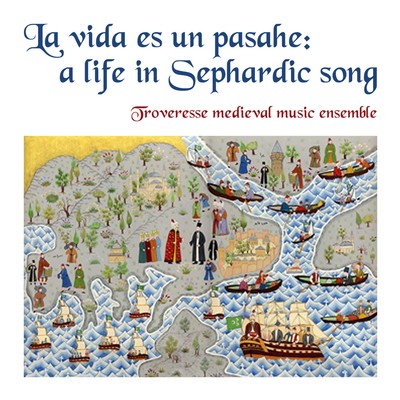 This program, woven from music and poetry, continues Troveresse’s exploration of the ties between music written in the Middle Ages and music from the oral traditions of Europe and beyond. La vida presents a life, or various possibilities for life in the songs of the Sephardim.

These songs, of birth and death, love and hate, joy and sorrow, loss and longing, are remarkable for their poetic and musical beauty and for what they communicate of the indomitable human spirit.

All but one of the songs on this disc (Üsküdara, which is in Turkish) are in the language usually known as Ladino, a dialect of Spanish which the Sephardim retained in the new countries in which they settled after their expulsion. While the songs change as they travel, taking on musical and linguistic characteristics of their new homes, many of them retain musical and poetic links with Spain. ‘Gerineldo’, for instance, can be traced to a Spanish romance, ‘Quién hubiese tal ventura’ found in Diego Pisador’s Libro de música para vihuela.

From the liner notes, written by Helen Dell

La vida es un pasahe: a life in Sephardic song is available for download from the iTunes Music Store.
It's available for streaming through Apple Music.

La vida es un pasahe: a life in Sephardic song is available as as CD. It can be purchased online through Buywell Music or the Australian Music Centre which both offer secure online ordering.