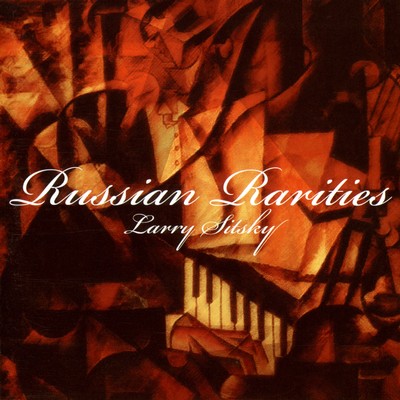 The amazing leap of style form Rubinstein to the other composers recorded here happened in the space of only a few short years. Russia was in turmoil, the verge of revolution, and given such a state, it was inevitable that music would change rapidly and probably extremely.

This group of composers led the world avant-garde in their day. I am certain that they were seen as Bolsheviks and extremists by the West. Some managed to get published through some Viennese firms, but generally, they were a local product, and eventually, when Stalin came to power in the late 1920s, he banned them totally, because art was there to serve the proletarian ideal, and had to be accessible to the masses. Ironically, the revolution resulted in the suppression of what was seen as the extreme left! The composers were certainly in advance of their counterparts in Europe, for a number of years.

Rubinstein represented the end of the romantic era in Russian piano music, but an era in which he personally chose to ignore the nationalistic school and the ethos of the Mighty Five group of composers, who wished for a truly patriotic school of composition based on Russian folk music; Rubinstein, instead, used European models for his own work, moreover models who represented the more classical aspects of European art (Mendelssohn is a fine example) rather than the more progressive composers such as Liszt. The musical upheavals in Russian music began less than a decade after Rubinstein's death. Were it not for the eventual Stalinist suppression, the group of composers represented on these CDs could well have led and surpassed their European counterparts in their sheer audacity and exuberance. (Larry Sitsky)

The Rubinstein Variations are performed on the Rönisch piano at the Canberra School of Music. The rest of the program is played on a Steinway Model D (not RR3 as the CD box states).

“ONE of Australia's most neglected senior composers, mainly because of his long-time academic and performing concentration in the ACT, Larry Sitsky made a name for himself through controversy in the 1960s. His compositions have rarely travelled to Melbourne but his reputation as a pianist has, if
anything, grown over the past half-century. This double CD is dedicated to one of Sitsky's main areas of interest: Russian composers prior to and in the decades after the 1917 Revolution. The vast selection begins with Anton Rubinstein's substantial, late Romantic Variations Op. 88 and concludes with miniatures by Vladimir Rebikov and Nikolai Obukhov. In between, Sitsky gives expert and character-loaded interpretations of music by unknowns such as Vladimir Shcherbachev and Leonid Polovinkin, as well as more well-regarded composers such as Artur Lourie and Aleksandr Mosolov. Assisted by Sitsky's virtuosity and insights, these action-packed discs offer both bewildering variety and a surprisingly adventurous spirit of exploration and experiment”

“A labour of love, then, this large-scale exercise. You have to admire Sitsky’s dedication and erudition, as well as the clear evidence throughout these recordings of his innate virtuosity. A lot of it makes for hard listening – not just the sheer percussiveness of a morsel like Deshevov’s Rel’sy which imitates Bartok’s Allegro barbaro in several respects – but the sustained aural onslaught of the three focal sonatas. This music-making gives some welcome substance to our knowledge of a strikingly fertile time in Russia’s musical activity that, for many years, was in danger of being wiped from the memory of all but a few true believers. We should thank Sitsky for his remarkable gift of restoration.”

Forms in the Air Artur Lourie

Russian Rarities is available as as CD. It can be purchased online through Buywell Music or the Australian Music Centre which both offer secure online ordering.