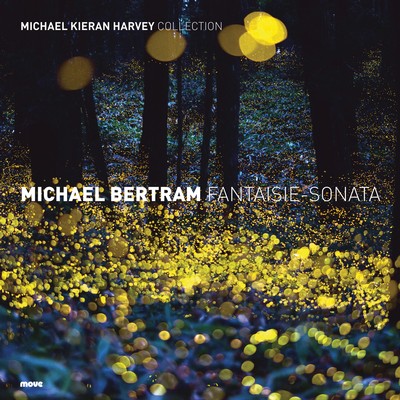 Larry Sitsky went on to describe the 'Fantasia-Sonata' as a 'massively ambitious work on a grand romantic scale' exhibiting a brand of self-belief that reminded him of Scriabin ... 'I have a feeling that the composer has something to say and is not afraid to say it in the face of current fashions, which I find admirable'.

The shorter works are contrasting pieces, concluding with the iconoclastic 'Seven Sarcasms for an Out-of-Tune Piano'.

Michael Kieran Harvey premiered 'Fantasie-Sonata' in 2001 which was reviewed at the time by The Age critic Clive O'Connell: "He performed with involvement and intensity, outlining the work's characteristics in broad strokes, observing every change of texture and emotion. The sonata takes full advantage of its fantasy nomenclature ... the effect is an elongated improvisation which Bertram has couched in a variety of languages."

“It’s not a form you come across too often, the fantasy-sonata combination. There are the two by Scriabin – an early one outside the canon and the Op. 19 in G sharp minor (there’s a lovely key for you) – one by Raff, another by Turina. Only the German composer uses the same title word-order as Bertram; not that it would make too much difference, I suppose, except in giving some hint about the composer’s set of priorities. The Australian work is a confronting amalgam that has a great freedom in its opening, then becomes more formally conservative as it moves towards its ending.

The Fantaisie-Sonata is this CD’s major offering, coming in at a little under 50 minutes. In comparison, the other compositions are slighter: two of the Six Bagatelles from 2012, the Seven Sarcasms for an Out-Of-Tune Piano, and an isolated Violet 2, written five years ago. None of these cracks the five-minute mark, the Sarcasms cycle’s elements decreasing in time-span as the work moves to its conclusion. But, as a job lot, these comprise a substantial amount of the composer’s output for solo piano. Still, the oldest piece is the CD’s title work which has waited 16 years for its appearance here, performed by its initial interpreter with splendid technical mastery and obvious sympathy...For its breadth – of intellectual ambition, of pianistic skill, of emotional flexibility, of sustained continuity – this is an extraordinary construct, Harvey giving it as eloquent an interpretation as you could want. What I find particularly attractive about it is that it maintains your attention; it excites, puzzles, illuminates in turn and what sense you make of its language, form and imaginative processes depends on a willingness to enter Bertram’s idiosyncratic but remarkably open sound-world...For all that, Move has done us all excellent service by giving a voice to this impressive, challenging composer and providing a forum once again for the insights and artistry of this country’s finest pianist.”

“Michael Kieran Harvey’s excellent track record in championing the piano music of Australian composers is evidenced again in this compelling interpretation of Michael Bertram’s impressive major piano work, Fantaisie-Sonata. Bertram’s flamboyant approach to piano composition is ideally suited to the virtuosic brilliance of Harvey’s pianism. In a way the smaller works filling out the CD are as worthy of attention and promotion as Bertram’s major piano work, Fantaisie-Sonata. Michael Kieran Harvey certainly gives them the interpretive respect they deserve.”

Michael Bertram Fantaisie-Sonata is available for download from the iTunes Music Store.
It's available for streaming through Spotify and Apple Music.

Michael Bertram Fantaisie-Sonata is available as as CD. It can be purchased online through Buywell Music or the Australian Music Centre which both offer secure online ordering.