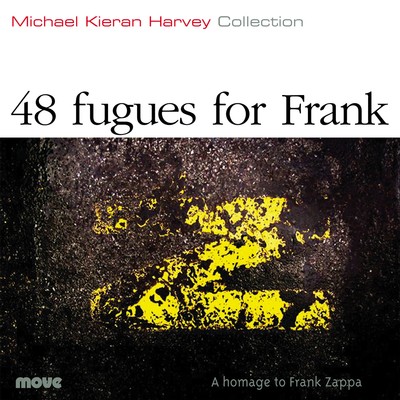 Harvey's homage to Zappa "48 Fugues For Frank" was premiered at Mona Foma 2010 and won an AMC state award for best composition in 2011. A labor of love for Zappaphiles and anyone else with an interest in advanced music, innovative poetry and artistic vision. Each of the ten pieces uses four or five ideas inspired by, reacting to, or developing some of Zappa's signature techniques.

The following detailed review comes from Phil Sandford writing in extempore. The magazine's website is www.extempore.com.au

“An unpredictable, exhilarating tribute to one of rock’s greatest instrumental pioneers. Like Zappa, pianist Michael Kieran Harvey is fearless and inventive. 48 Fugues For Frank is a unique tribute.” ★★★★

“The distinguished Australian pianist Michael Kieran Harvey has produced a powerful and virtuosic tribute to Frank Zappa. Harvey has created a suite that establishes him as an emerging composer of piano music.

Homages to an artist can take a variety of forms such as recording new versions of their work. Groups such as Ensemble Modern, Meridian Arts Ensemble and The Persuasions have followed this path in the case of Zappa. Harvey has taken a different and more challenging approach, using some elements from 11 of Zappa’s compositions to create a completely new work.

As befits any musical reference to Zappa there is no shortage of musical jokes: there are 10 pieces, not 48, and some of the elements are summed up in Harvey’s tongue-in-cheek words: ‘repetition is the mother of twisted arpeggios’, ‘pompous counterpoint’, ‘gratuitous arpeggios’, ‘ clichéd Romantic chords’ and ‘Baroque pastiche’.

As also befits a homage to Zappa the music is demanding and works on a number of levels. The listener is treated to a virtual history of classical piano music as Harvey utilises the full range of the piano and moves seamlessly from Zappa to Stravinsky, Bartok and Debussy, with some Bach and Schumann thrown in for good measure, and succeeds in blending them into a challenging set of contemporary pieces for piano.

In a kaleidoscope of musical colours moments of calm and beauty are combined with tension, driving rhythms and dissonant sections, and at times Harvey has so many things happening at once that it seems there are two pianists at work.

The compositions that Harvey has used as inspiration for his suite mainly come from Zappa’s last decade when he started using the Synclavier, the first digital synthesiser-sequencer, and the period when he increasingly concentrated on ‘serious’ music. As Harvey says ‘These pieces pay homage to Zappa’s fascination with purely instrumental music. The use of vocals restricted his idiomatic complex style to an accompanying role...’ This selection has the virtue of avoiding Zappa’s compositions with sometimes reactionary lyrics, which have often served as a barrier for listeners to his music.

Like his idol Edgar Varèse, Zappa was intrigued by the development of electronic instruments and he used the Synclavier on albums such as Francesco Zappa (1984), Jazz from Hell (1986), The Perfect Stranger (1984) and Civilisation Phaze III (1994). Although advances in technology have made the Synclavier largely obsolete, it provided Zappa with the chance to hear approximations of what he was writing without the expense of hiring a symphony orchestra.

When he died in 1993, at the age of 52, Zappa left behind a substantial volume of compositions. The guitarist, composer and satirist blended a wide variety of musical and other influences. Largely self-taught, Zappa didn’t recognise the boundaries instilled by traditional musical education and he was influenced as much by Varèse, Stravinsky, Bartók, Ravel and Webern, along with music of Tibet, India and the Middle East, as by Spike Jones, pop, rhythm and blues and jazz. Elements of film, dance and opera were also present in most of his work. Alone amongst his rock contemporaries he was able to integrate these diverse influences into a recognisable style.

Like Zappa, Harvey has a very broad range of influences and has also been able to integrate them into his playing and composing. Among others he has recorded Liszt, Messiaen, Shostakovich and Okamoto as well as contemporary Australian composers such as Vine, Westlake, Sitsky, Ford, Gifford, Nock and Gould. He has used computer-generated music , for example on his compositions ‘Elektra’ and ‘Toccata DNA’. He has recorded over 30 CDs and this is his 16th for Move.

Zappa’s contribution to so-called serious music remains an open question. He did not feel happy with his use of symphony musicians until he worked with the Ensemble Modern on The Yellow Shark just before his death and his last work was to supervise this group recording Varèse, but this remains unreleased.

In his ‘serious’ music Zappa employed techniques such as speech-influenced irregular rhythms, percussion treated as on a par with other instruments, collages, abrupt changes and air sculptures or balanced blocks of sound. Most of these are present in one form or another on the CD.

The dramatic opening phrase of Fugue 1, influenced by ‘Greggery Peccary’ and ‘Pentagon Afternoon’ announces that Harvey is about to unleash some serious music.
Inspired by ‘The Girl in the Magnesium Dress’, the second piece moves from a beautiful opening to a tense cadenza and a lyrical close.

One of Zappa’s Synclavier pieces, ‘Jazz From Hell’, leads Harvey to use a series of chords as the basis for written ‘improvisations’ with a rhythmic interlude before returning to the original chords with a different melodic line. A characteristic Zappa device was to overdub parts at different tempos and ‘Tink Walks Amok’ is based on a solo by bass player Arthur ‘Tink’ Barrow. Harvey responds with some pounding bass lines and a touch of Stravinsky’s ‘Rite of Spring’.

In Fugue 5 Harvey uses Zappa’s final work, Civilization Phaze III, as the basis for a romp through ‘classical’ themes surrounded by calm opening and closing chords. One of Zappa’s more accessible ‘serious’ works, ‘G Spot Tornado’ is based largely on a melodic fragment that is repeated with slight variations and this inspires Harvey to a driving piece which culminates in a repeated treble figure.

Zappa’s melodic guitar solo on ‘St Etienne’ provokes Harvey to alternate lyrical and very tense passages. Harvey recorded a solo piano version of the very difficult ‘Ruth Is Sleeping’ on his Storm Sight CD (2001). In Fugue 8 the calm repeated opening notes give way to a series of increasingly tense arpeggios before a dreamy ending.

As a 14-year-old drummer, Zappa was entranced by Varèse’s ‘Ionisation’, written for 13 percussionists (including piano as a percussion instrument). This is reflected in Zappa’s ‘The Black Page’, where the melody speeds up and slows down over a steady underlying beat. In Harvey’s hands this becomes the basis for a driving tour de force performance.

‘Baby Snakes’ is the only influence from Zappa’s rock/pop works. The driving rock theme inspires a slow, beautiful bass melody from Harvey, which leads to a reprise of some earlier themes and concludes with the opening phrase of the first piece.

Listeners not familiar with Zappa’s later compositions may find the best way to approach this CD is with an open mind and simply enjoy listening as Harvey presents a challenging and rewarding program of contemporary piano music. He has given a glimpse of the sort of music Zappa might have produced had he not died so young.”

“The virtuosity is astounding. This is a CD which demonstrates that Harvey -- already acknowledged as an important pianist -- is also an important composer.”

48 Fugues for Frank is available as as CD. It can be purchased online through Buywell Music or the Australian Music Centre which both offer secure online ordering.