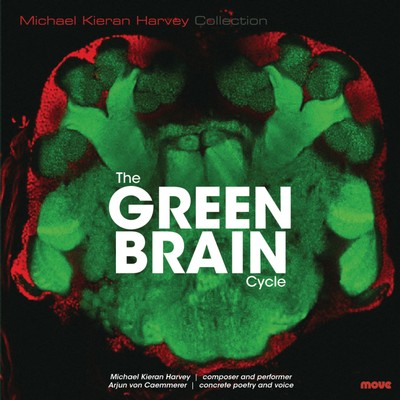 The work takes inspiration from Frank Herbert’s 1966 futuristic ecological novel The Green Brain, in which insect intelligence evolves leading to a resistance against the devastating impact of humans on the biosphere.

The work is in 20 movements for keyboards and piano, each named after major insect genera, and is accompanied by a series of ‘concrete’ poems by poet Arjun von Caemmerer.

By including this narrative anchor and integrating key passages from the book, (spoken in a strange techno-insect voice), the work provides an entry point for listeners to engage with the intense and seemingly discordant music of Harvey. Indeed, the quick movements, sharp clangs and odd mix of electronic sounds prompted imaginative visions of insect movement and debate.

Brigita Ozolins worked collaboratively with Harvey and von Caemmerer to design the set for the world premier performance of The Green Brain Cycle at Mona Foma in January 2018. It comprised poems in gold lettering on the walls, faux lawn, hundreds of small plastic insects, live plants and trees, shiny gold beanbags and a giant green glowing orb that was suspended almost threateningly over the grand piano. The set provided a good balance between the familiar, futuristic and otherworldly, creating a comfortable dramatically lit jungle-like atmosphere, which helped the audience relax into the performance.

“This extraordinary album, recorded in a live performance of the work at MOFO in January 2018, is inspired by the science fiction novel, The Green Brain, by the American writer, Frank Herbert. What homage! The tracks are all so different and beautifully conceptualised. Mosquitoes is the final piece on the album. It is a blissful riot where ascending and descending scales, melodic motifs and sequences are the basis around which all parts gravitate. These develop at varying paces throughout on vastly different electronic instruments and some beautiful harmonic progressions are built into this layering. But often it is timbre that is used to convey the message. The piece is rhythmically complex and simply intoxicating in its complexity and the technical precision required to communicate it. It is the complex, diverse interweaving of parts evoking the intricate structure of organisms we are gradually annihilating that is the feature of these compositions. Given that it is a live recording, the quality is superb. Let’s hope for another performance at some time. I can’t wait to use this album in my teaching!”

“Harvey uses various keyboards. ... Harvey’s creative process is so packed with energy and surprises that the constructional steps and formats become backgrounded, intellectually satisfying as they may be. ... From the start, Harvey’s melange of sounds is close to overwhelming. ... The texture is multi-layered and multi-faceted ... technical wizardry of a high order ... Last of all, Mosquitos is yet another brilliant demonstration of Harvey’s unmistakable dexterity, a presto that never lets up, climaxing in a unison/octave flight that leaves you breathless through its sheer velocity. It’s a modern-day toccata in the truest sense of that term where the composer/performer takes you by the scruff of the neck and demands that you keep up with his mental and physical athleticism. It makes a celebratory end to this vital compendium which celebrates the smallest among us with a wide-ranging humanity.”

The Green Brain Cycle is available as as CD. It can be purchased online through Buywell Music or the Australian Music Centre which both offer secure online ordering.