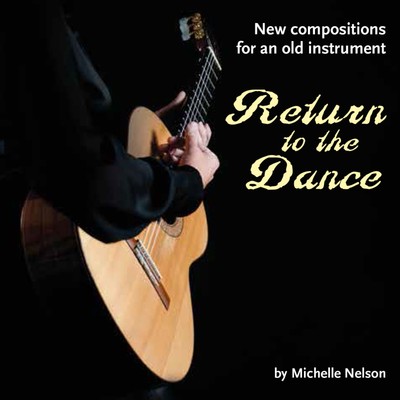 Includes the award-winning The Guitarist’s Bach, a homage to JS Bach in the style of his Lute suites, created for the modern EADGBE guitar.

"Guitars and dance go together like two sides of a coin; from the Spanish guitarists of old to the Rock era and on to the Pop world of the 21st Century. As a guitarist I have innately understood this connection. As a composer I have often mused on how modern art-music strayed so far from mainstream taste during the 20th Century. Perhaps the best way for it to re-connect in the new digital world is by a return to the dance." - Michelle Nelson

“This is a short (41 minutes) disc consisting of some homages, pastiches, imitations, take-offs – apply whichever term you like – and several original compositions. Melbourne guitarist Michelle Nelson has constructed and recorded a set of six works (well, five: the first and last tracks employ the same material in different guises) that are intended to link the old and the new as well as bring art-music back into the popular domain...Yes, you found plenty of easy listening in this album, which is at its most appealing in the Ice Crystals tracks.”

Return to the Dance Michelle Nelson

Return to the Dance is available as as CD. It can be purchased online through Buywell Music or the Australian Music Centre which both offer secure online ordering.