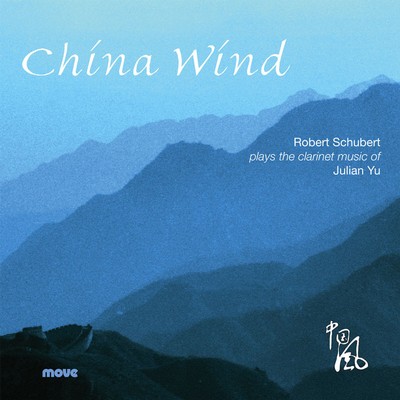 The playing from clarinettist Robert Schubert and his collaborators is exceptionally fine, and the high fidelity tone-colour and sound quality of the recordings capture beautiful, rich sounds from the various ensembles.

Julian Yu has always been fascinated by the organization, discipline and formularisation of Western classical music. These qualities, which also belong to Chinese folk music, can imply limitation, but Yu builds from such foundations with great freedom. The music of Atanos is non-programmatic and follows its own inner laws.

Yu originally wrote Sol Do La Re as an exercise in counterpoint for string quartet while he was studying in Japan in 1985. While not strictly serialist, the piece is built around a ground bass of twelve tones. The tone row is arranged pentatonically, and is repeated ten times as a ground bass, above which the music gradually unfolds as a work of extraordinary beauty and emotional intensity. In 1996 Yu wrote a version for clarinet and string trio.

In 1997, Robert asked Yu to write a new work featuring the clarinet, The Lamentation of Micius. Yu had come across some ancient music known as 'Micius Laments the Silk' while he was a student at the Central Conservatory of Music, Beijing. Micius, an ancient philosopher, had lamented that pure silk was dyed with different colours, and likened this process to what happens to people when they mix with the world, taking on the 'colours' of their environment, and losing their purity and innocence.

The raw material for Concerto on Chinese Themes for Clarinet and String Orchestra comes from northern Chinese instrumental music for wind and percussion. This is exuberant music, full of easily-remembered melodies, strident sounds and striking rhythms.

Silent And Alone is a setting of three poems by Li Yu (937-978), the last emperor of the Southern Tang Dynasty. Imprisoned after he was overthrown, Li Yu wrote in his diary that he “washed his face with his tears every day”, so miserable did he feel. Silent and Alone was originally written for tenor and orchestra. Yu's reworking of the piece for clarinet, piano and string quartet is no mere transcription; this version has fresh nuances of timbre and expression.

Robert Schubert is a Melbourne-based clarinettist and teaches woodwind at the Victorian College of the Arts.

“This disc, with the accomplished clarinet playing of Schubert, is highly recommended” ★★★★½

“Julian Yu is one of Australia’s most illustrious composers, with an international reputation and a long list of awards to his name. This CD presents a selection of Yu’s music from several stages of his career, with the common thread being the clarinet, and more specifically, clarinettist Robert Schubert, a long-time champion of Yu’s music.

As a survey of chamber and orchestral works ranging from the 1980s to the early 2000s, this album serves as a good introduction to Yu’s work. The playing from Schubert and his collaborators is exceptionally fine, and the recordings made in several locations around Melbourne capture beautiful, rich sounds from the various ensembles. This high fidelity tone-colour and sound quality is of course what every composer hopes for, but is perhaps particularly important for Yu’s very “classic” music which seems to demand a certain consistency of sound in performance and reproduction. The earliest work represented here, Sol Do La Re, is a passacaglia study from the early 1980s. It’s a charming curiosity, and evidence of Yu’s longstanding mastery of the technical mechanisms of Western counterpoint.

Two more substantial works, Atanos and The Lamentation of Micius, date from a key period of Yu’s work, the 1990s. Here, we find the creative voice that made him famous, introducing what seemed to be a new kind of lyricism to late-20th century modernist concert music. Atanos (1995) is a very fine piece for clarinet, flute and string trio, inflected with a lovely warm chromaticism and references to the twilight romanticism of Zemlinsky, early Schoenberg and Berg.

The Lamentation of Micius (1997-8), on the other hand, takes inspiration from ancient Chinese Qin music. While not actually making direct use of the musical material of the original, the Chinese music suggested certain kinds of sonority to Yu. The result is a terrific ensemble piece for clarinet and string quartet, making particularly splendid use of pizzicato effects to create a beautiful sound-world that is somehow both abstract and poetic. With the three-movement Silent and Alone (2000), originally composed for voice and orchestra but here presented in an alternate version for clarinet and string quartet, we find Yu giving free reign to the frank romanticism that must have been an asset during his early career as a “ghost writer” for film and tv soundtracks. Here, the chromatically saturated diatonicism that was always latent in Yu’s concert music gives way to explicit tonality and an aesthetic that sounds strangely retro, complete with quaint oriental flourishes.

The most recent work on the CD, a Concerto on Chinese Themes for Clarinet and Orchestra (2004) takes this a big step further into the well-trodden genre of folksy Chinese-Western orchestral hybridity. Appropriating some well-known Chinese “folk” tunes, this concerto seems to hark back to some kind of naively ideological musical style. A nostalgia for the composer’s youth? A political message about the role of China in the modern world? Or perhaps a respectful homage to the pioneers of Chinese orchestral composition in the optimistic years of the old republic, who themselves used some of these same tunes? What this style of music means for the 21st century remains unclear. The Greek composer Iannis Xenakis noted that when transcribed into western notation Asian music loses its unique characteristics and sounds like western music. Yu’s concerto seems closer in spirit to early Vaughan-Williams than to anything particularly Asian, and perhaps that is the point.”

China Wind: the clarinet music of Julian Yu, Volume 1 is available for download from the iTunes Music Store.
It's available for streaming through Apple Music.

China Wind: the clarinet music of Julian Yu, Volume 1 is available as as CD. It can be purchased online through Buywell Music or the Australian Music Centre which both offer secure online ordering.